Hi again. I thought I was done with aquariums (sold my IM 25G macroalgae lagoon almost exactly two years ago because I didn't make the time to take care of it) but here I am. Last year, I took an algae class and was reminded how much I love them. Also, I moved last summer from an apartment to a house and actually have space now for a good-sized tank and water mixing station so why not triple down and go with a 75G? I've been gradually acquiring the equipment over the last year and am finally starting to put the system together.

I wanted a white rimmed tank but couldn't find one so I figured I would just buy a black set and paint it. This was probably a bad idea because I have no idea how this stuff will hold up to water damage but it sounded good at the time? Since I had to paint it anyways, I went with a pale blue because it's pretty. The tank is painted with Krylon Fusion Matte Vintage Blue, the stand is painted inside and out with exterior acrylic matte white paint (I don't remember what kind). I replaced the black hinges with white hinges and added sea glass cabinet door knobs. The back of the tank is tinted a smoky gray with translucent window film.​
Filtration - Fiji-20 Advanced Reef Sump (2nd gen)

I wanted to have a sump to hide the equipment but my stupid stand makes it hard to get a normal-sized sump into it without having to drop it in from the top. I didn't want to have to drain and move my display tank to replace/remove my sump, so I opted for an undersized sump that I can easily get in/out. I chose this model so that I could have more flexibility with filter media (aka not have to use filter socks) and because it looks nice.​
Lighting - Aquatic Life 48" Hybrid T5HO 4x54W Fixture with LED Mounting System, white (Giesemann tubes, 2 x Tropic and 2 x Aquablue Coral)

Lighting was an agonizing decision. After reading about the pros and cons of LED/MH/T5, I ended up choosing a hybrid system. Theoretically, it's good bang for the buck, lights the whole tank evenly, and lets me add more intensity if I need it. The plan is to hang it from the ceiling over the tank but I don't know what to do about cord management.​
Flow - Red Sea ReefWave 45 Pump with Controller (3960 GPH), Lifereef HOB slimline overflow box, Jebao DCP-3500 DC return pump

I was curious about gyres and the Red Sea seemed like a good one to try. It's less popular than other brands but it's supposed to be super quiet, unobtrusive, and easy to maintain. I guess we'll see once it's set up! I opted not to drill my tank because I wanted the flexibility to change the flow patterns in my tank. I learned about Jeff and his magical never-fail overflows from other people who use and love them.​
Substrate - CaribSea Ocean Direct Caribbean Live Sand (Original Grade), Addictive Reef Keeping purple rock

I wanted a more natural look so I went with an unsifted sand. I hate the look of white rocks so I went with purple rocks.​
Controller - Coralvue Hydros Control 4 (not purchased yet, saving up for this)

I like that it comes with a temp and pH probe, supports an ATO system, and is relatively inexpensive!​
ATO - Coralvue Hydros ATO kit (not purchased yet, saving up for this)

Reservoir will be this food-safe 5 gallon container from Amazon.​
​
Livestock plan
The tank will be mainly focused on macroalgae from Gulf Coast Ecosystems, some softies, and a few captive-bred fish. No definitely plans yet, but I want to keep it simple and easy to maintain.

(Only the tank and stand are set up now.) 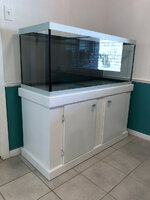 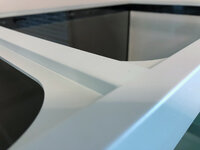 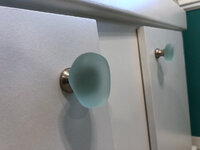 How’s the progress coming along ?

I’m curious how long that paint on the plastic trim will hold up.
OP
OP

Since my last update, the Lifereef overflow arrived, along with a couple of early Christmas presents: a Coralvue Hydros X4 Controller kit and the ATO!

I had enough parts to start putting the system together so the sump, overflow, and return are all hooked up. The prospect of schlepping all that water from my mixing station outside (WHY IS IT 82°F and 90% HUMIDITY IN DECEMBER?) was unappealing so I am having iced tea and watching tv instead.

I asked Jeff to make the overflow clear so both the inner and outer boxes are clear. I think it will mean more maintainance to look nice but I really like the aesthetics of freshwater planted aquariums (lots of glass and white) and wanted to have the same elements. (I was looking for a lily glass return but couldn't find one that big enough haha!) 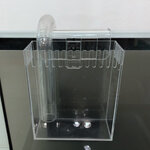 The lil Fiji-20 sump. I'm not planning to use socks, just filter floss. Each of the compartments has a clear lid but those were drying in the sink when I took the picture. I'm planning to go skimmerless for now, so the sump will just have the floss, a pH probe, and a temp sensor. Somehow I forgot to buy a heater, so I need to get one. 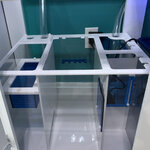 Cord management? What is that? Seriously, though, all the electrical stuff is going to be mounted on the side once everything is plugged in. The container is for my top-off water. Hoping 5 gallons is enough to last a week. What I wanted was a really fancy matching plexi ATO container but what I could afford is a food-safe brining container from Amazon for $26. 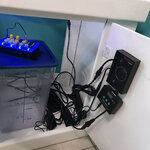 Hoping to get water, sand, and rocks in the system and start cycling by the end of the weekend!
OP
OP

The tank is full of water, pumps have been running since yesterday, and no leaks in the plumbing (so far, knock on wood). Apparently I didn't buy enough sand so I had to order more (along with a heater).

The HOB overflow is really incredibly loud. I have the optional silencer for the overflow, which helps a lot but I've read that people have been able to get their Lifereefs to run silently so I guess I have to tune it?

To do list for this week:
I'm debating whether to order some macros for the tank to help the cycle since they are covered in nitrifying bacteria so that might happen this week, too.

smootie said:
The tank is full of water, pumps have been running since yesterday, and no leaks in the plumbing (so far, knock on wood). Apparently I didn't buy enough sand so I had to order more (along with a heater).

The HOB overflow is really incredibly loud. I have the optional silencer for the overflow, which helps a lot but I've read that people have been able to get their Lifereefs to run silently so I guess I have to tune it?

To do list for this week:
I'm debating whether to order some macros for the tank to help the cycle since they are covered in nitrifying bacteria so that might happen this week, too.
Click to expand...

Empty the tank now and drill it. For a thousand reasons, you'll be happy you did it now. It's safer, quieter, more reliable, etc. It would be very easy to put in a ghost overflow. I'd even be willing to help you drill it.
OP
OP

Cody said:
Empty the tank now and drill it. For a thousand reasons, you'll be happy you did it now. It's safer, quieter, more reliable, etc. It would be very easy to put in a ghost overflow. I'd even be willing to help you drill it.
Click to expand...

I've drilled my tanks before and I prefer un-drilled. I know I'm in the minority, but I like being able to easily move my plumbing around to experiment with flow. Thanks for the offer though!

i've had pretty good luck with the lifereef overflows. Like you, the biggest problem I had was the noise. It quiet down a bit after running for a little bit.

I thought about running a cannister filter on a reef tank with some lily pipes for that clean glass look. 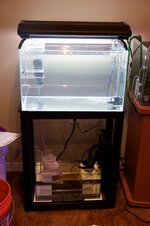 this was 10 years ago, so things have progressed alot in the mean time lol

soymilk said:
this was 10 years ago, so things have progressed alot in the mean time lol
Click to expand...

It took a little longer than expected due to my horrible choice for sand, but the lights are up and the sand and rocks are in. I was going to set up my ATO, but figured I would hold off to see if I needed to do a massive water change.

I chose the CaribSea Ocean Direct Caribbean Live Sand because it's a mix of grain sizes and looks more "natural." Hoooooo boy! I added the sand and clarifier packets to my tank, which immediately created milky water and a tan-colored foam that covered EVERYTHING. My DT and sump were filled with what looked like foamy milk tea for two days. It's slowly getting better -- filter floss (I actually used Polyfil, which I had left over from a crafting project) in the sump helps. Unfortunately, this pushed back aquascaping for several days because I literally could not see through the water.

The lights are up thanks to Mr. Smootie but I need to be borrow a MARSH PAR meter to adjust the hanging height. Also, I need to rearrange the bulbs because I have both daylight tubes in the front of the fixture and both blue ones in the back.

The HOB is almost silent now (hooray!) except for the sound of water flowing into the internal skimmer box.

Finally, because I have no self-control, I ordered a bunch of macroalgae from Gulf Coast Ecosystems. Those are going in the tank later today. 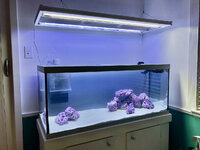 Awesome! You'll have to let me know what Macro Algae you went with and we can compare notes and maybe do some trading in the future once yours grows out

Awesome reading how your tank is coming along. I have no patients as well. I also think white looks best outside the tank. Black looks best in the tank.
OP
OP

A few new friends moved into the tank since my last update: some macros from Gulf Coast Ecosystems, a pair of clowns (a picasso and a phantom) from FJW, a flameback angel from OceanLife, and a peppermint shrimp and blood red fire shrimp from Fish Land.

Macros list:
I also got light brown "macro" from Galveston that could be a bryozoan (thanks to guylaga for the lead on that one).

I fell in love with these two as soon as I saw them:


Sargassum (my favorite macro despite it refusing to stay superglued) with flameback photobomb: 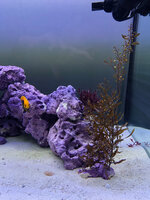 The tank looking slightly less sparse than before (with a bit of sargassum that came loose stuck on the overflow of course): 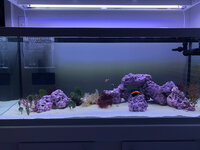 The lights were lowered to the recommended height (10-11" above the water) but I'm planning to take PAR readings and adjust them again. Once I know how much light I have to work with, I can start planning out the corals (softies and LPS, nothing fancy).

Today I discovered that the flameback angel is tearing off bits of all my macros and I'm not sure what to do. Do you think OLA will take it back?
You must log in or register to reply here.