I recently made a lifestyle change after having a few small reef tanks in my house. Long story short, I made the switch and chose to go full time RV about a year ago. I sold all of my furniture, including all of my reefing supplies and tanks, thinking a small reef was impractical in a RV. As many of you know, the “reefing itch” never leaves you once it hooks you lol. After some irrational mixed with rational thoughts and planning, I am happy to say that I have set up a pico reef…in the Airstream! One of the best parts about this reef is that if I do decide to travel somewhere in the RV for a weekend, the pico can be completely taken down and transferred to a stable environment with one 5 gallon bucket. For some that may remember, I used to have the same tank setup as a pico reef before I moved, but I will be using different equipment this time. Here is a breakdown of my tank and equipment…

As far as the media basket filtration, I have one Chemipure nano packet, additional minor amount of Red Sea carbon, one bio ball, and some poly filter balls that are from a desktop IM purity pack. I only use the filter balls from the pack. Fits perfect in the media basket and is easy enough to rinse out 2x/week.

I set this tank up at the beginning of August with a fishless cycle, added a raw shrimp from the local grocery store. The guys face was priceless when I asked him for only one shrimp at the seafood deli.

Yea, just one man! I’m on a strict diet!

I added Dr. Tim’s one and only to get things going. My ammonia spiked up to about 8ppm using an API test kit, so I took the shrimp out after three days. The whole initial cycle took about 26 days to complete.

The maintenance plan for this tank will be minimal, including a 75% water change every week, siphoning sand and back chambers as needed.


When I was planning this tank, I had thought about making it a zoa dominated softie tank. I have since decided to make it a mixed reef complete with goniopora varieties, high end zoas, and maybe some easier SPS. As of right now, I have a few zoa varieties, a neon green goni, baby fungia, and probably my favorite so far, a Koji Wada pink nepthea. I added a few small trochus snails to start doing their thing. As far as fish, I picked up a baby neon dottyback who absolutely loves being the only fish in the tank. I can tell that he has a lot of attitude for as small as he is. Currently at about an inch long, he is the king of the reef.

Salinity 1.025 (Hanna), temp 78.9 (Hanna), ALK 12.5 (Hanna) phosphates 0.11 (Hanna), nitrates 2 (Salifert). I plan to use the Red Sea kit for calcium and Aquaforest for magnesium. Just haven’t picked up those two yet. Last time around, I used the Red Sea blue bucket salt, but decided to switch it up and try the Red Sea coral pro with higher ALK this time. It will be neat to compare growth and color vs using the blue bucket.

I plan on attending Reefapalooza-Texas here in a few weeks and am really excited about it. I am hoping to pick up some fire and suck up some deals going on!

Well, I think that sums things up for now. Thanks for checking out my setup. I have attached a few pics of my current setup, and one from before 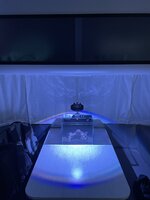 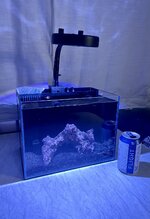 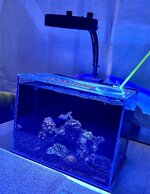 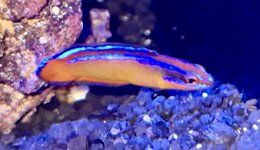 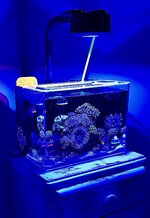 Wow.. I do like a nice nano. Out of curiosity, when you move the RV, do you have to cover the tank with something to prevent spills?

welcome back, how do you handle the water splashing around when driving?
OP
OP

second_decimal said:
Wow.. I do like a nice nano. Out of curiosity, when you move the RV, do you have to cover the tank with something to prevent spills?
Click to expand...

The Airstream is stationary. I live in it full time here at an RV resort in Clear Lake. The whole tank can be taken down and transferred somewhere if I want to go on vacation/tow the Airstream. Thanks for checking out my thread.
OP
OP

soymilk said:
welcome back, how do you handle the water splashing around when driving?
Click to expand...

Thanks a lot! The Airstream is parked. If I had to drive it around, this reef tank would be impossible. If I decide to go on vacation, or move the Airstream, the whole tank can be broke down and transferred with a 5g bucket.

And here I was envisioning Saran Wrap around the top of the tank or a snap on lid lol.
OP
OP

You might be on to something there. I think if that was the case, it would be a seriously turbulent reef, especially here in the Houston area. No pumps or power heads needed haha

Haha you got it!

Thanks for checking out my thread! More updates soon.
You must log in or register to reply here.