Been a while since I've posted here, but I want to pick your brains about the next stage of upgrading my 75g to a 150g.

We got the new tank set up, dialed in, and transferred all the inhabitants of the 75g, but unfortunately my previous aquascape pretty much came apart in chunks when I was moving it. I had used cyanoacrylic glue and reef epoxy to hold it together but that failed and broke apart as I moved it into a holding tank while we were getting stuff rearranged.

I want to save as much as possible when setting up the new aquascape, we've got mushrooms, zoas, and a ton of green star polyps on a good number of the rocks. As well as a few others, but those i can simply pick up (brain corals and stuff on frag plugs.)


Most of the aquascape tutorials I've been watching give ideas for how to cement or glue wet rocks that are kept moist with wet towels or by spritzing with water, but I feel like that's probably not going to be enough to keep the corals alive. I'm OK with losing a few, but I really don't want to have to start over from scratch.

Anyone have any ideas how to accomplish this? I don't really have the room to glue them while still in the tank, and I don't want to risk depleting oxygen levels or having a rockslide while trying to get stuff to set.

My main idea is using the rubbermaid bin I used to transfer them, filling it with about 4 to 6 inches of saltwater. Then putting a pump in with a short hose attached and setting the hose on top of the rock to pour water down the side with corals for a few hours to let the cement set. Do you think they'd survive this?

Any thoughts or suggestions are welcome!

can you get a rubbermaid pond tub?

Rubbermaid Commercial Stock Tanks are built tough for superior performance and long-lasting durability in all kinds of weather extremes.Find the TANK STOCK 100 GAL POLY at Ace.

it'll give you some space to work in. usually cement doesn't set well on wet rocks I thought. unless you're going for a very thin delicate rockwork. I'd just stack it up as stable as I could. There is something to be said about having rockwork thats not all glued together. If you have to remove a fish or something, getting rid of the rocks won't be such a huge issue if everything is not glued together.
OP
OP

The rubbermaid I have is a 40 gallon, so it should give me enough space to work in while keeping stuff pretty wet. Provided that I'm willing to do the scape in chunks.

My main concern with stacking is getting them into a pleasing order without risking a rockslide when I add livestock like big snails or diggers like pistol shrimp/gobies. secondary concern is getting enough flow throughout the tank around the rocks.

I'm also concerned about the coral on the rocks I had previously aquascaped, as the rotation of the rock on most of them won't stay that way naturally. They are off balance because they were either the top of an archway or a supporting pillar. I don't trust the archways to stay up without being reinforced. Getting those to sit stacked in a stable way will probably force me to crush some coral. This is what it looks like currently. It's a massive mess and I want to get it looking good again by this weekend when I have the time to do it. (And when I can try to kill that dang hair algae once and for all.) I have the sand piled in the middle right now just so it's easier to place the rocks on the bottom. It will get evened out once the scaping is done.

I suppose I could try to glue the crap out of it and just avoid arches.

Also, a picture of what the rockwork was like before: 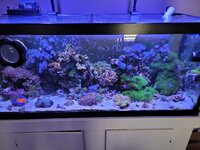 Honestly, I wouldn’t re-glue anything. Your yumas (maybe ricordeas?) are so gorgeous I would be terrified of losing some due to the glue. Personally, I would frag what I can and try to delicately position the rest. I wouldn’t focus too much on making it the same as the original aquascape, just making sure that all the corals are correctly oriented and in a position with the correct light/flow.

If you’re really intent on having arches maybe you should look into the man-made rocks? They should be much sturdier than supergluing two rocks together and after the coralline grows in they look very natural (just my experience, my coralline matches the color of the rock almost perfectly so now it blends seamlessly).

Just my two cents, because I think you’re right about focusing on flow through the tank and things like that. Bone cutting the coral off the rock should be a pretty safe bet to saving the coral and maintaining your aquascape’s integrity good luck!
E

I agree with @PicassoClown; if you can cut some of the corals off of the existing rock, keeping a small rock base, could you then create a basic scape (with cement if needed or even rods) and then epoxy/glue the "frags" back onto that structure? That way you can maximize the stable surfaces of the rocks and still place coral where it will do best. I know getting mushrooms to attach where you want them is hit or miss, but if they are already attached to a small piece of rock, it should be a lot easier. 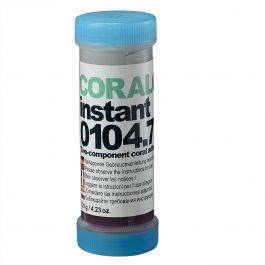 Why does BRS recommend this? Tunze Coral Gum is by far our favorite two-part epoxy to work with for frag mounting. Coral Gum is a fast setting epoxy that gives you just enough time to get the frags in position, but it sets much faster than other aquarium epoxies so that you don't have to sit... 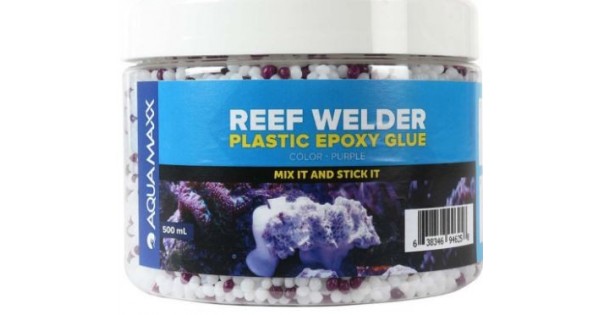 Both work well underwater and both set quick from my own experiences. Its not going to be permanent, but it will add sturdiness to your scape. Zoas and GSP can survive not being submerged during shipping. Colonies of zoas are wrapped in newspaper when they are shipped in from vietnam/cambodia/laos, so they should be okay if you wanted to use traditional glue/cement/epoxy.

Can’t believe no one has suggest Marco mortar. You could try and go step by step. Arrange a layer of rocks, lift and solidly lock into place with a generous amount of Marco rock mortar, let it set and then do the next layer. Maybe even set the whole thing up so you have an idea of what you want it to look like and then put everything back in the tub and proceed at your own pace. Keep the acros in the tub covered in water with a pump (and heater etc.) You can take as long as you want since they can last a couple of days even with no light. 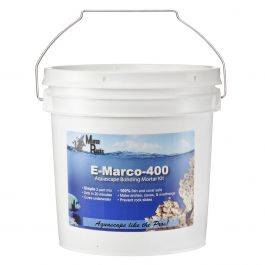 100% Non-Toxic - Triton ICP Tested Have you ever wondered how they make those remarkable aquascape structures? MarcoRocks E-Marco-400 Aquascaping Kit is how! The kit includes everything you will need to create your own morter that is specially modified to keep the joints from becoming brittle in...

Thanks for all the suggestions! I decided that trying to reglue/cement right this second probably wasn't for the best. As mentioned, I was afraid of killing too many things to really leave them out long. I will be getting some epoxy for a few pieces to help hold them in place, but most are stacked and interlocked so they won't fall. I will purchase new dry rock over the next few months and take my time building some parts to add to this scape, or to replace parts of it. It will give me the time needed to let the cement cure, and doesn't risk my current corals.