Can’t wait to see how this little thing is going to affect the corals.. @Reefahholic

The initial bulb combo I went with is

What are you switching from?
OP
S

Cool. I’m sure they will do great under those lights. You’ll notice that some colors color differently under t5 vs LED.
OP
S

yea i was looking at a tank recently that had a Hybrid set up. i really like the actinic blue the T5's throw off but T5 lacks the pop and shimmer that you get from the LED or MH hence the reason they make such a great combo. we will see once i get it running. my expectation is that this will lead to hair algae hitherto unseen.

It’s funny that reefaholic and I argue about lights once a quarter yet we fully agree on the best system of lights which is a hybrid.
OP
S

Yea.. Can’t wait to get this thing off the ground and running. The LEDs are Nanobox Reef. The guy who mods the ATI’s designed the arrays as well. He took special consideration to mitigate the “Disco effect” and after a few redesigns, has been using a mint channel that now is incorporated into the G5 Radions. But he’s been doing that for a few years already.
I really hope to get the soft glow mixed with the shimmer from the LED’s and then nice royal blue for night time pop.

Best change I’ve made in this hobby. Hybrid all the way.

Just curious,where did you get it from ? I didn’t know you could customize the LEDs...
OP
S

that was from NanoBox Reef owner and light guru Dave Fasson. But good luck trying to get him on a project. usually backed up maybe now the corona virus it will be different..

the LEDs are bluefish controlled so plenty of adjustability from your cell phone.
R

Thanks.
I had T5 10yrs ago on a FW converted 55gal. Things were growing like weeds.
fast forward bought a 180 with no $ spared equipment in 2013 , Led were Maxspect razors( bleeding edge I guess)
Never had been able to grow anything well since. Hence my interest in the hybrid,makes a ton of sense
OP
S

not too hard to mod a maxspec. I (and others here im sure) would be glad to offer lots of encouragment and useless information. (sort of my specialty) he only does the ATI lights i think. but yea.. hybrid is the way to go imo too. the LED's replace the MH and the heat that they throw off. as a bonus you get cool night lights and get color pop that i had never seen under my T5 / MH coralife fixture. it was the first thing i noticed when getting back in the hobby a few months ago.. holy cow LED have come a far way that neon color pop is just unreal..
R

Just ordered one today, he’s hard to get a phone call back from...crossing fingers I receive my stuff as ordered
OP
S

thats awesome. I.m waiting for my hanging kit and bulbs. It’s killin me haha.. im sure your fixture is going to be awesome. He told me he was not going to build anymore so you might be getting one of the last customs In a while. What size did you wind up with?
R

i fired that thing up today and it was pretty impressive..

Nope I used cast iron pipe and fittings to mount to wall.

Loving mine too.
I’m excited for you 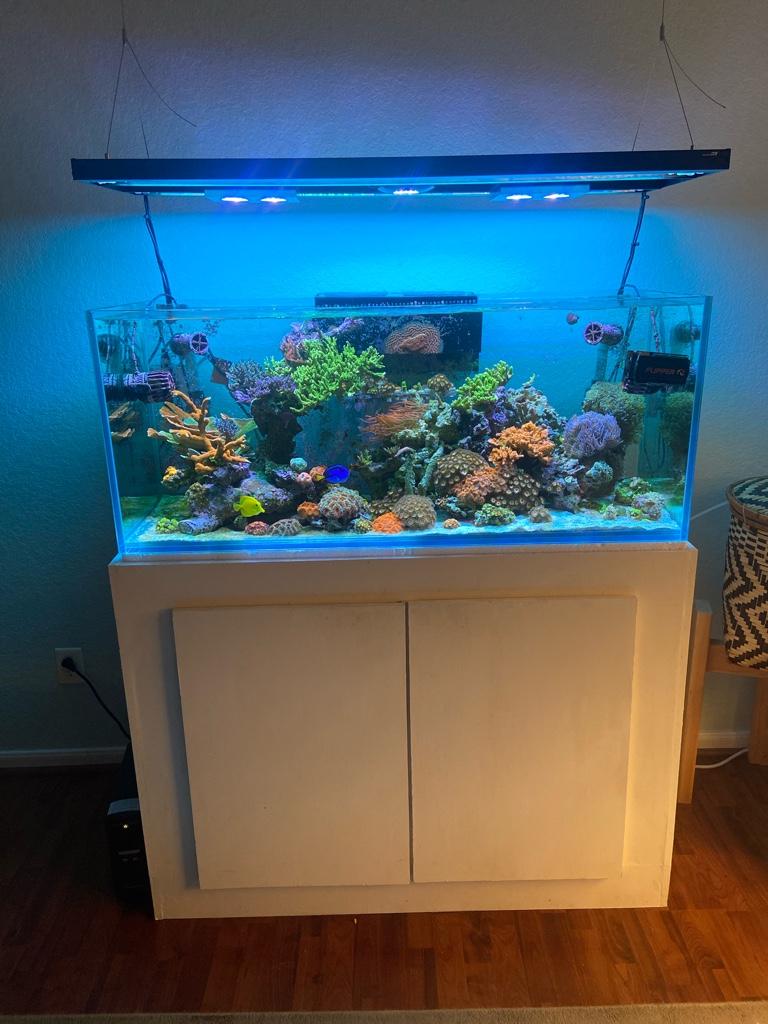 yeah.. problem now is i see how dirty my tank is.. look more like a sump and makes me want to rip everything out, clean/rinse it. lmao. your tank looks awesome.
You must log in or register to reply here.