after running my 40g for nearly 2 years, I have run out of space and finally convinced my wife to let me upgrade. I wanted to go with a 120g but just couldn't get her approval for it so we settled on the 75g.

It took me some time to get all the hardware and some of what I have isn't the best but when you have a very tight budget and have an expensive hobby like ours, you make due with what you can and upgrade later.

I started with a used Marineland 75g tank that I picked up locally. 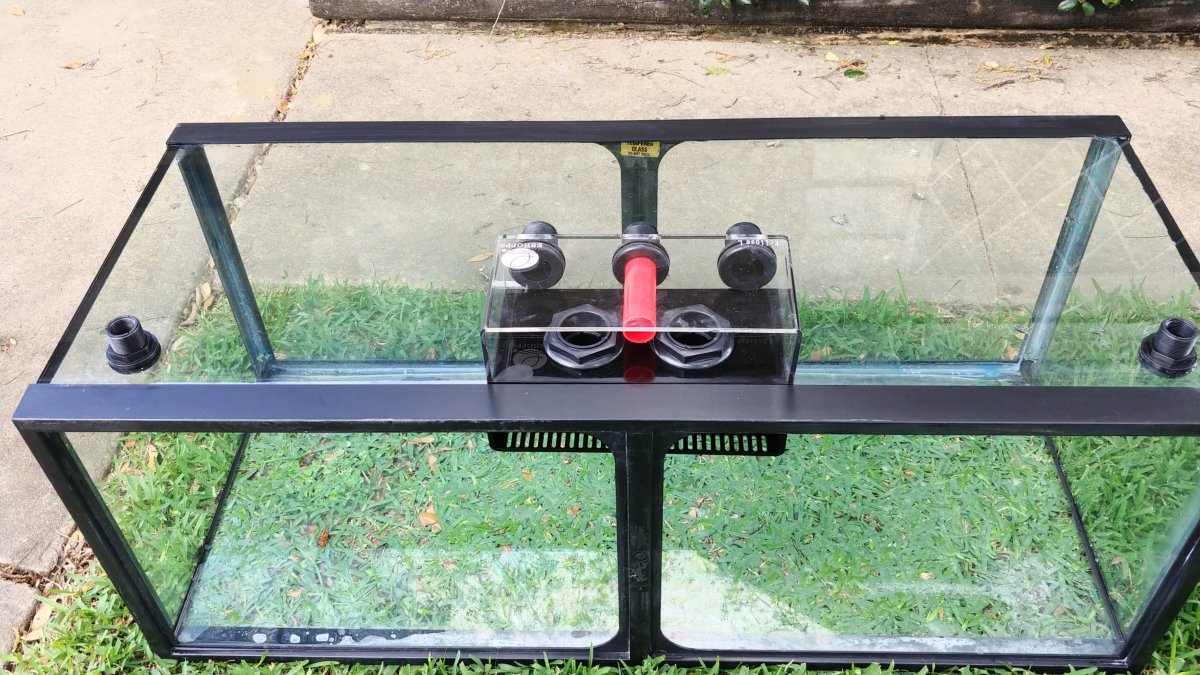 I went with a custom made internal weir box and EShopps Eclipse L external overflow box and twin 3/4" returns. Drilled all 4 holes by hand, and let me tell you that it took a while.

The rest of the setup is as follows.

Custom made stand from local hobbyist.
Precision Marine R24 sump.
Reef Octopus eSsence S-130 skimmer. (picked it up 50% off at Reef Currents)
Current eFlux 6010 DC return pump.
All plumbing is 1" Sch. 80 pipe and fittings.
A pair of Jebao PP-4 power heads.
2 - 3/4" loc-line with Y adapters, a pair of broad fan tips and a pair of VCA Random Flow generators.
50 lbs of reef-saver rock and 20-30 lbs. from my current tank once it's cycled.
40 lbs. crushed coral base with an additional 20 lbs. Carib Sea Fiji Pink live sand (all new)
1 Brightwell Aquatics ceramic slab and a 2qt box of spheres for the sump.
Lighting is the 48" Reef Breeders Photon V2 (upgraded to the V2+ .

Got the painting, and plumbing mostly completed. I had to remake the return lines from the second set of valves up due to a small leak at the last 90 elbow before they threaded into the bulkheads. I used a cheaply made threaded nipple that had a mold seam on it for this part. Apparently even my sanding it down wasn't enough and caused a slow drip. So I had to remake these sections. I originally had unions where the external valves are but I was not able to procure the same brand of unions and with removing them and having to extend the vertical pipe from the bulkhead made it too long and caused the pipe to intersect with the overflow box. So the next best option was to use ball valves to fill the gap but provide ample clearance for the overflow. 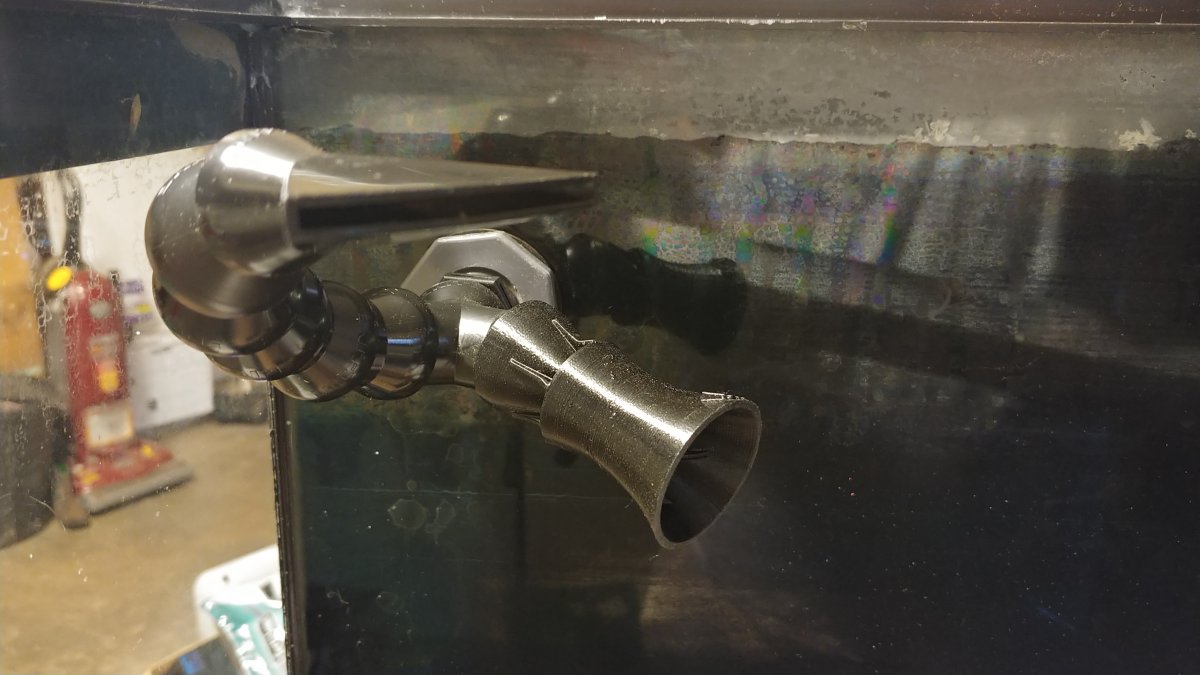 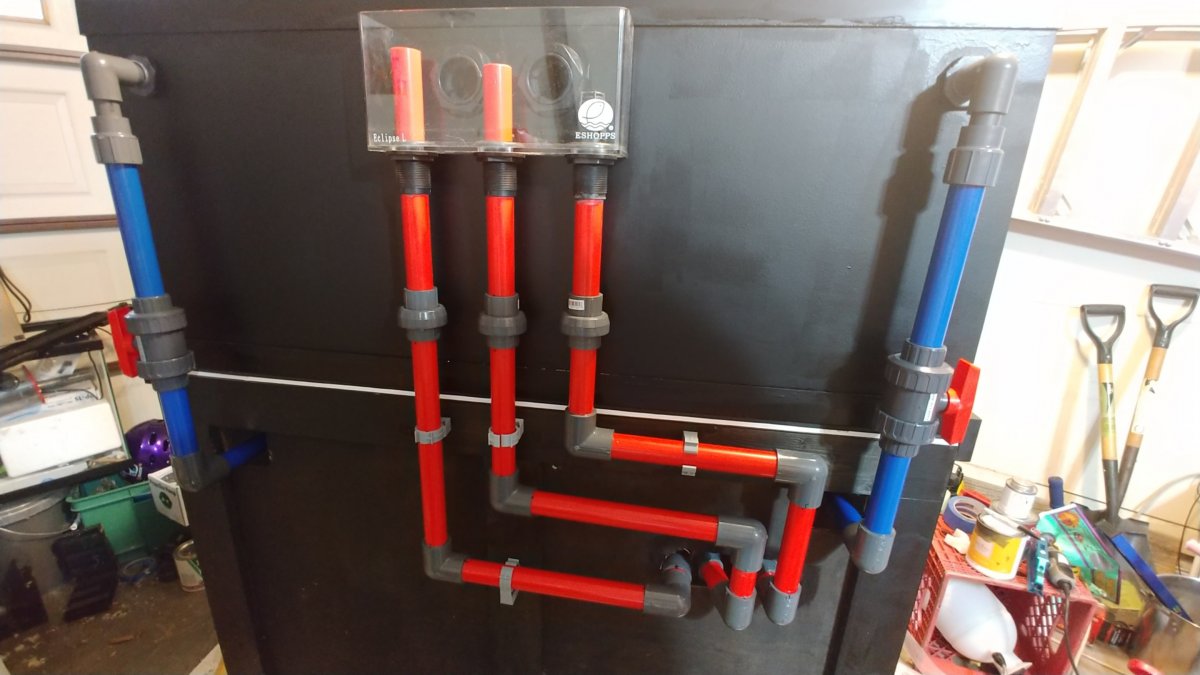 Rough in on the sump. 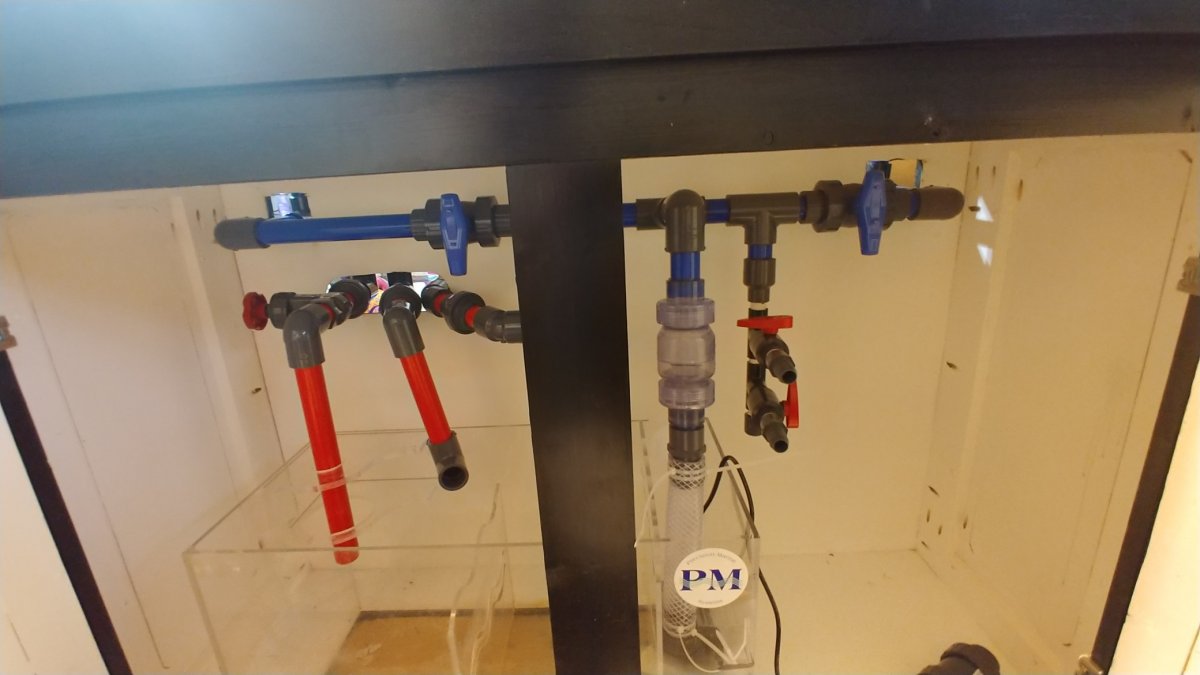 Got it leak tested over the weekend after having to rebuild both return lines from the (now installed) outer valves to the bulkheads due to leaks. I ran the system for 24 hours and not a single drip from any joint. I had to buy another pump because the brand new Jeabo DCT-8000 I have made a god awful whine and never settled down. So I replaced it with a Current EFlux 6010. Amazing little pump for its size. I was surprised that it was smaller than the Jebao and fit perfectly in my sump and I was able to leave the rubber mounting feet on it. I will have to reach out to Jeabo on the DCT-8000 for warranty replacement. Hopefully they will replace it and if so I'll keep it around as a emergency backup if the EFlux should fail. I also got the overflow and return lines dialed in fairly close - took about an hour of making very small adjustments to get it right, but I am pleased with the tank and sump water levels. Overall noise is silent aside from a gentle trickle coming from the weir when the RFG nozzles change the direction of flow towards it. 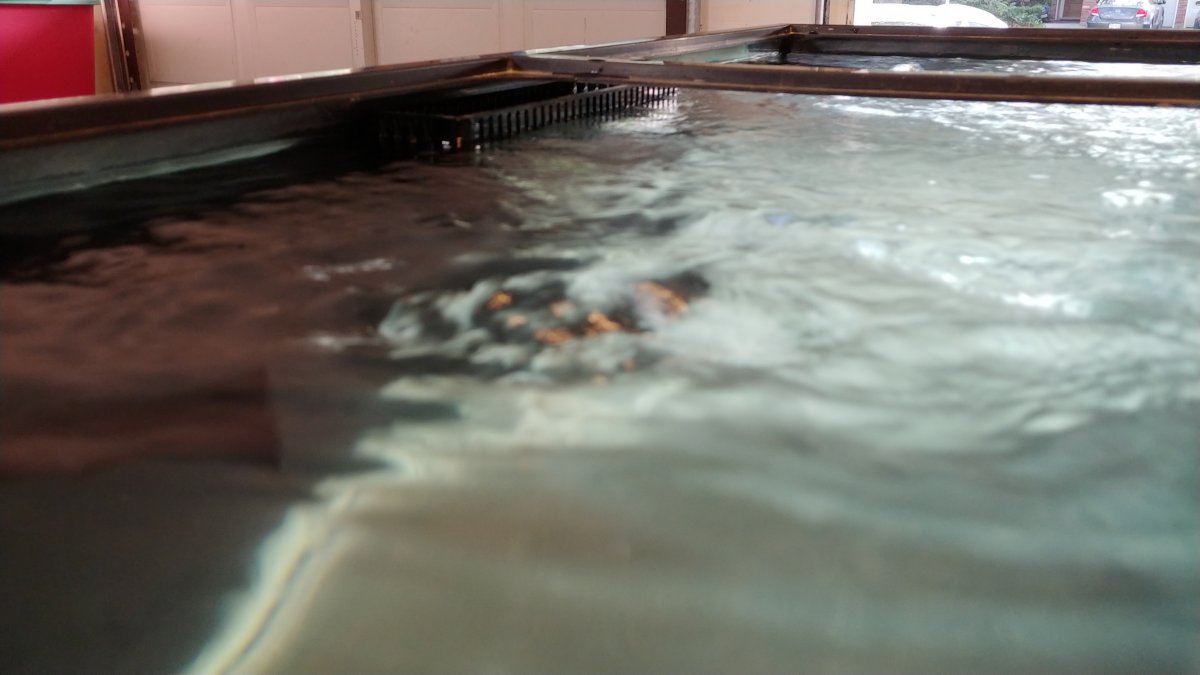 The waterline with the custom weir. 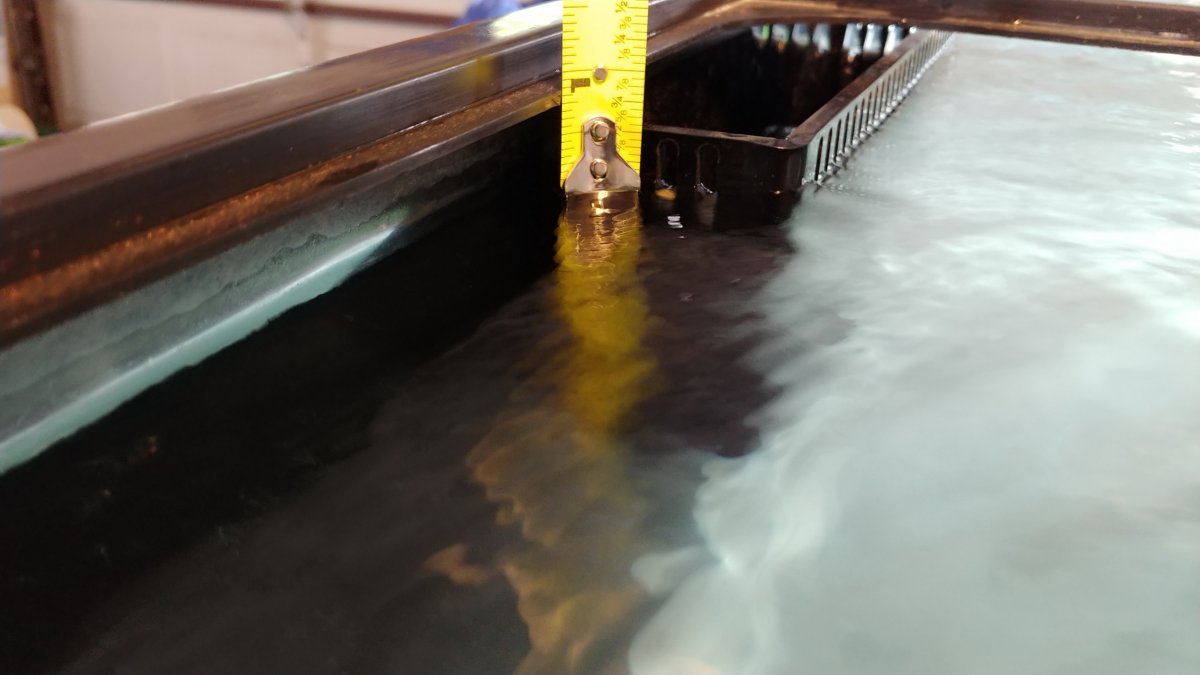 Overflow box water level when I had dialed it in. Aside from a gentle water trickling sound, it's totally silent. 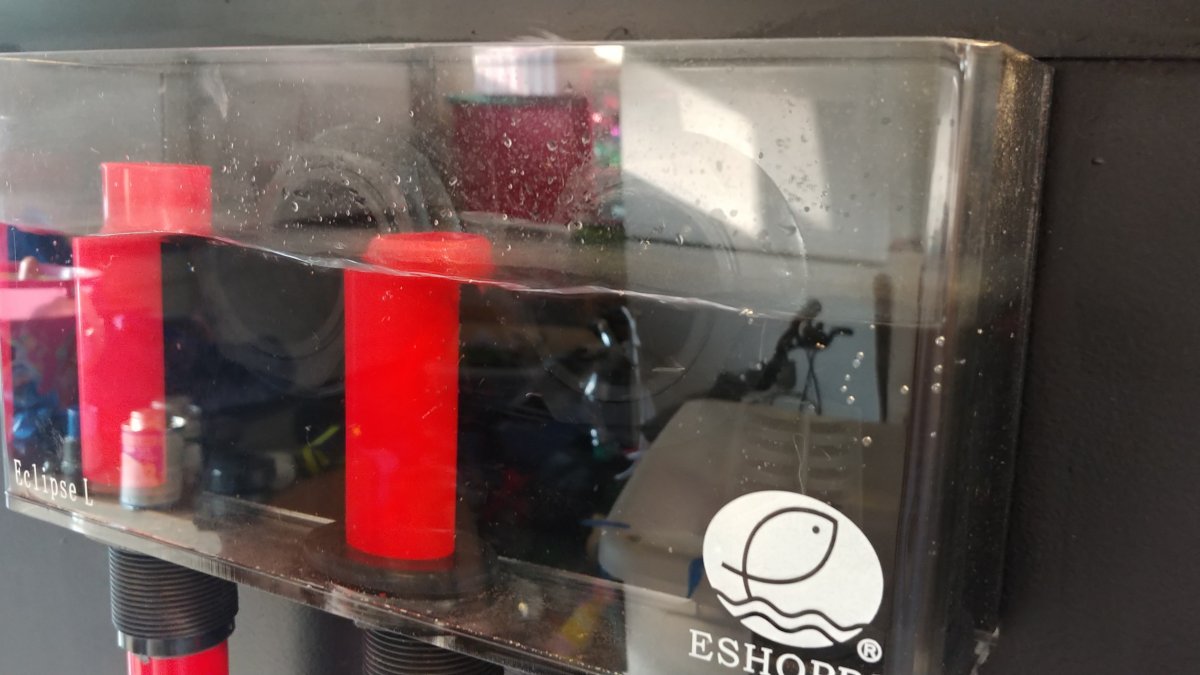 Sump water level when running. Primary drain is just about 1/4" below the water level rendering it silent. This also put it right in the middle of the range for my skimmer. 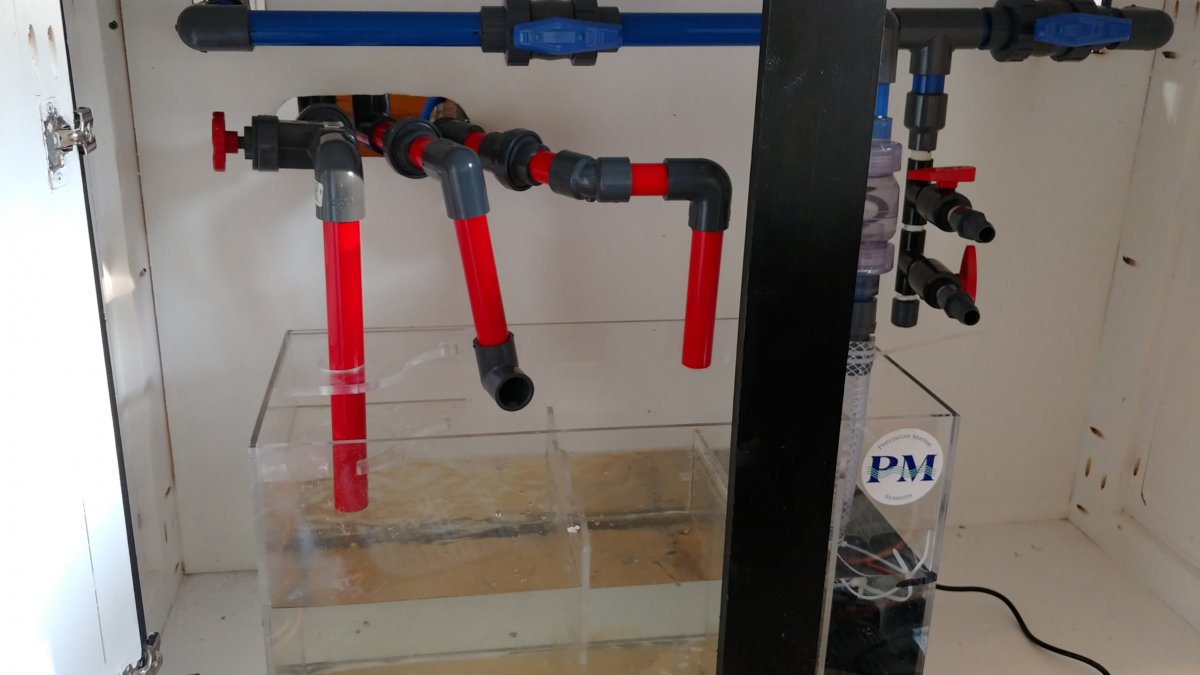 Got the electrics in and almost ready to move it into the house.

I mounted a 1/4 plywood sheet with a piano hinge to the back wall. This will allow me to mount/hide the bulk of the power adapters, cords as well as keep my various pump controllers and timers well organized. 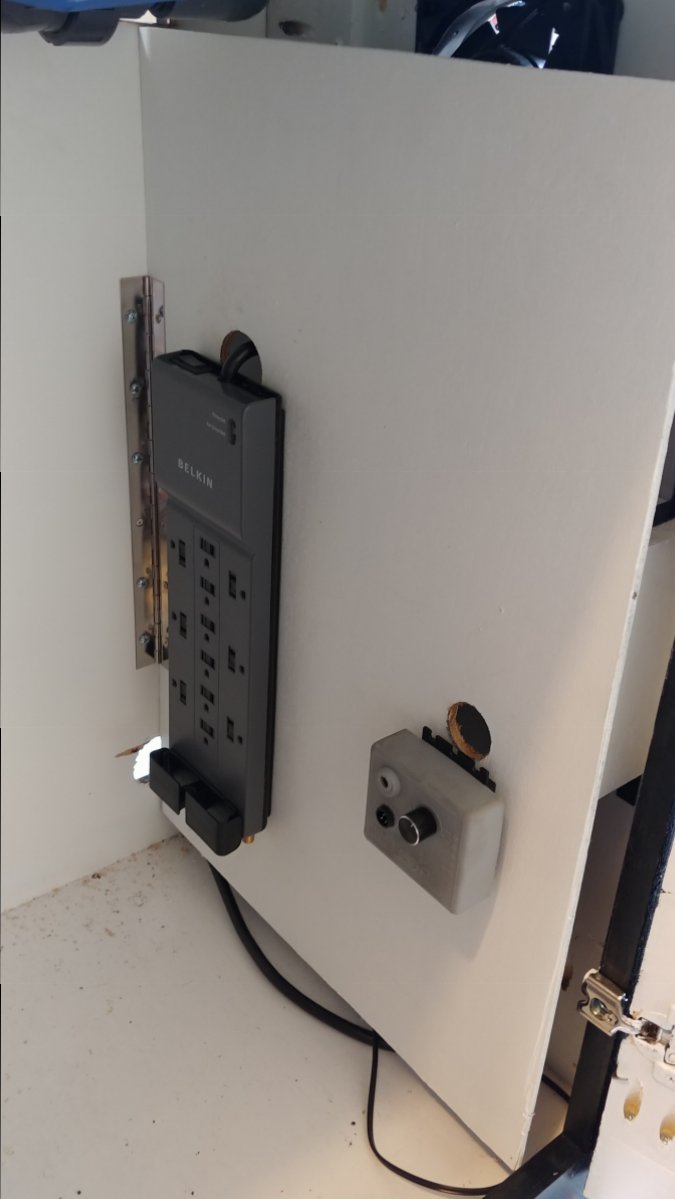 I also installed a 110v 120mm vent fan. My intention is to have this on the same timer as the skimmer. That way the sump area will be well vented when the skimmer is in operation. It moves a fair bit of air and is extremely quiet. But after messing with it I decided to wire it into the temperature controller instead so it will kick on if the water temp goes more than .3 above the desired set temp. 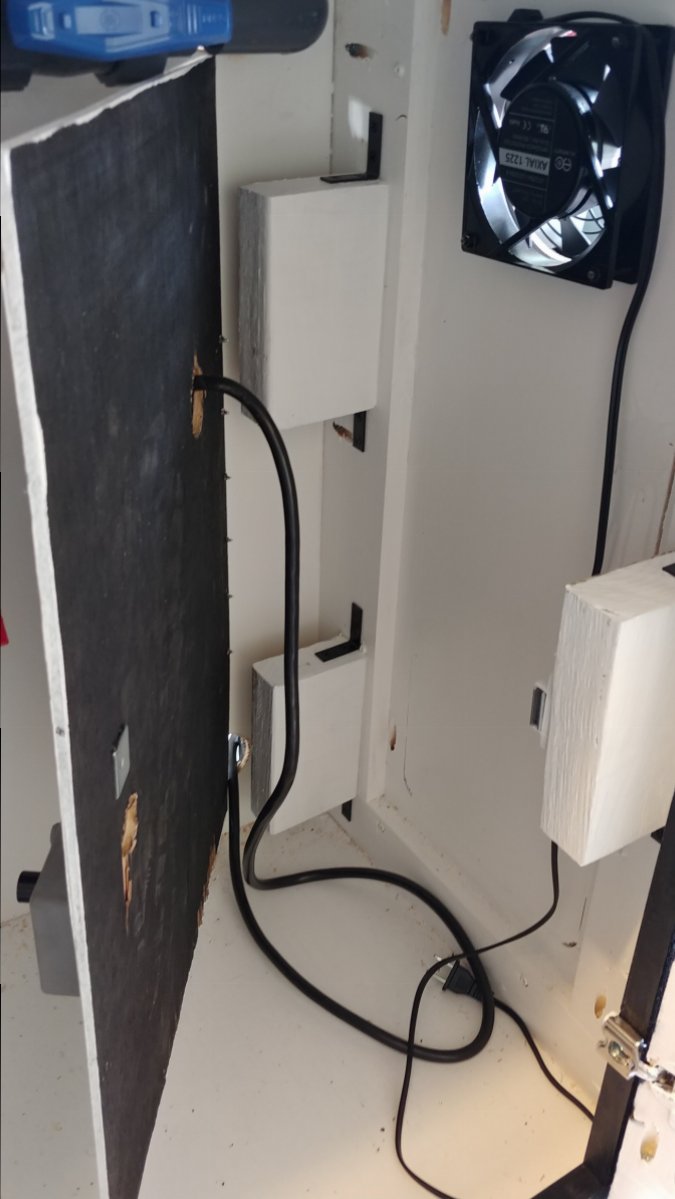 Everything is in the sump area, now just need to mount the pump controllers and do some cable management. 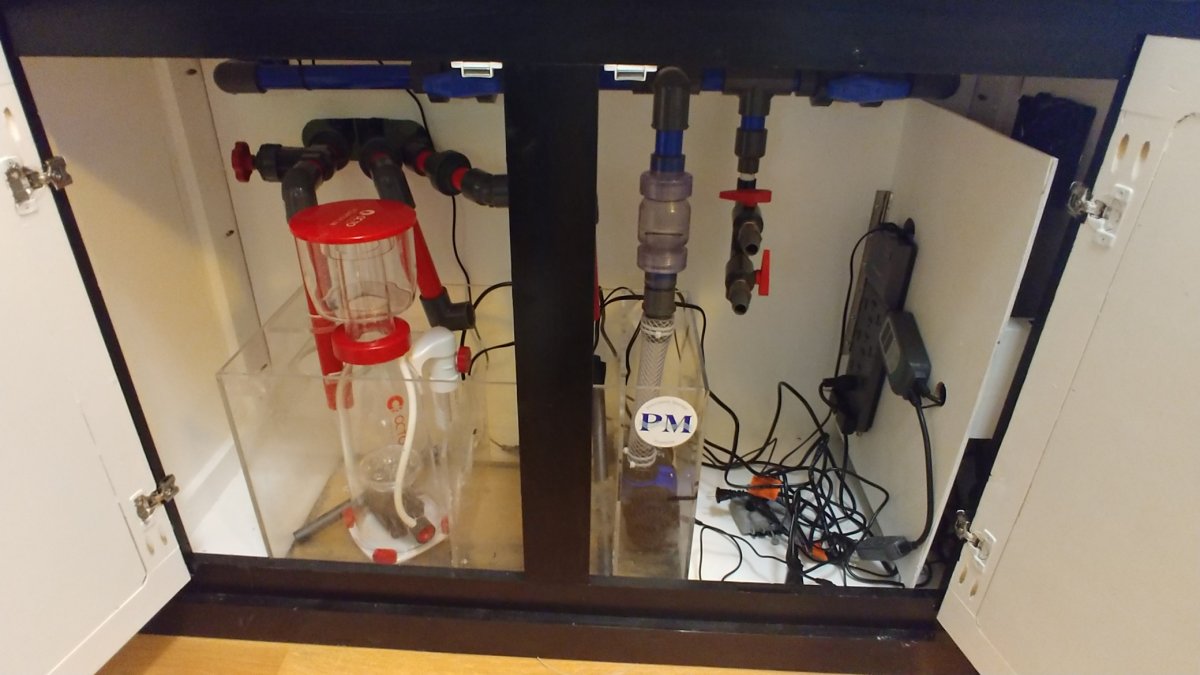 The tank is finally in my living room and time to play with some rocks. 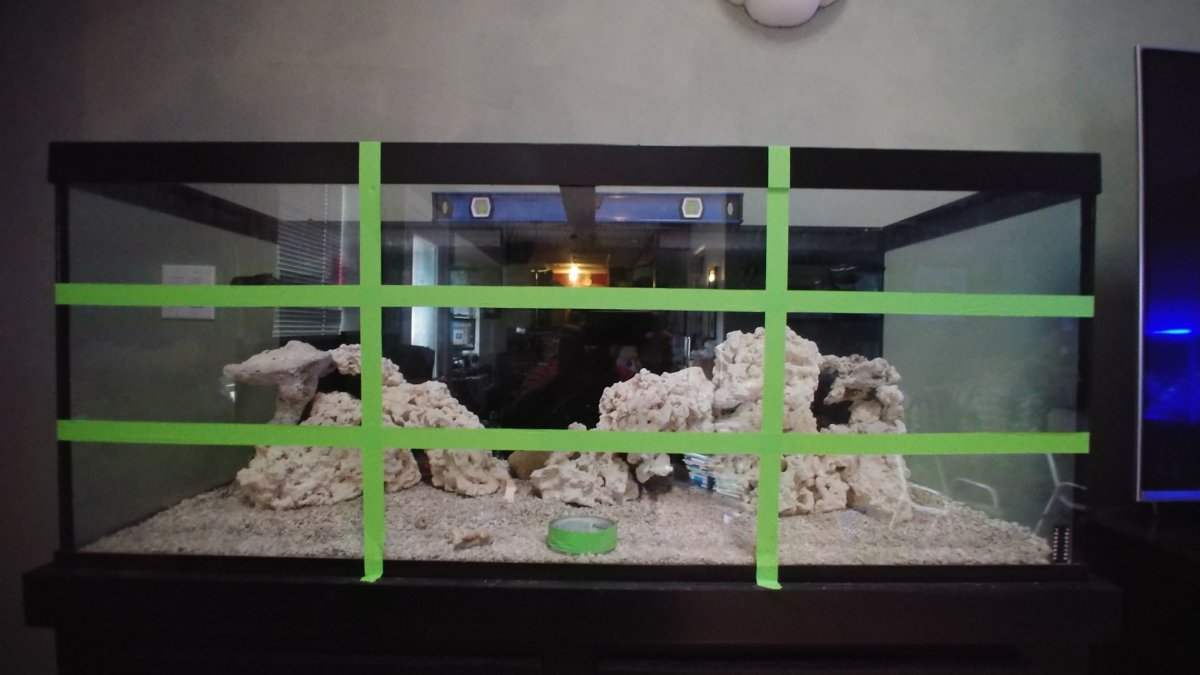 I used a mix of hot glue, epoxy and super glue to secure the rock work in place. All but two pieces locked into each other and are very resistant to shifting, but they were epoxied anyway.

And just before the water. 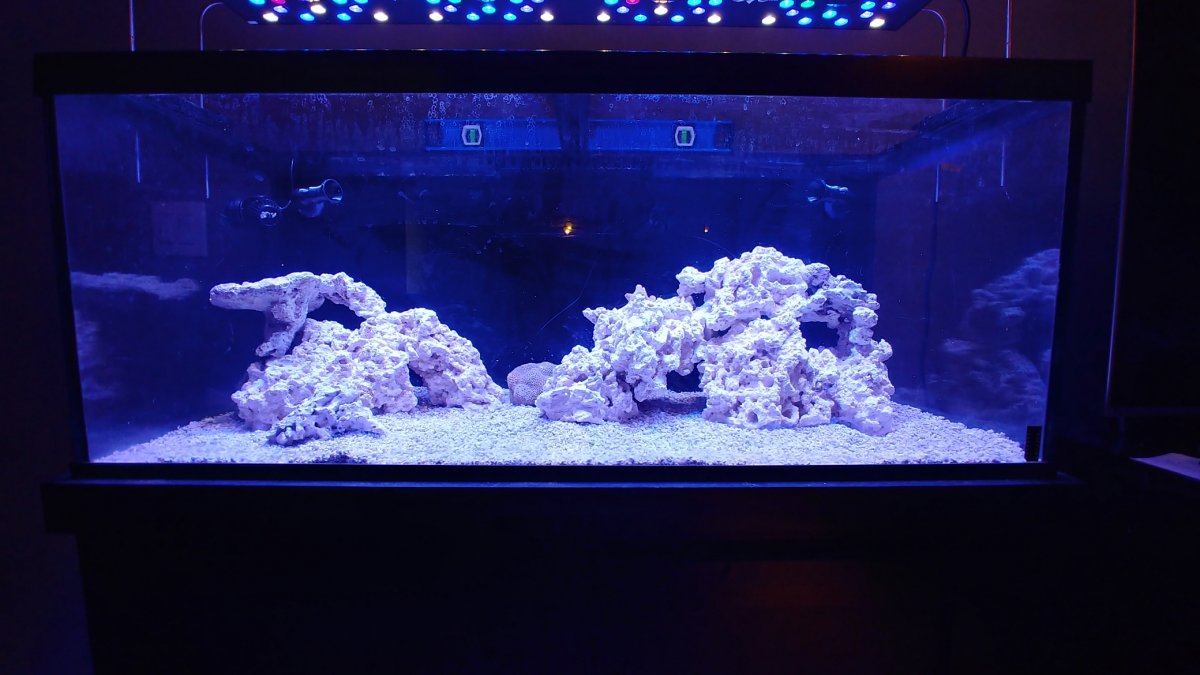 I let the epoxy cure overnight and got it filled. 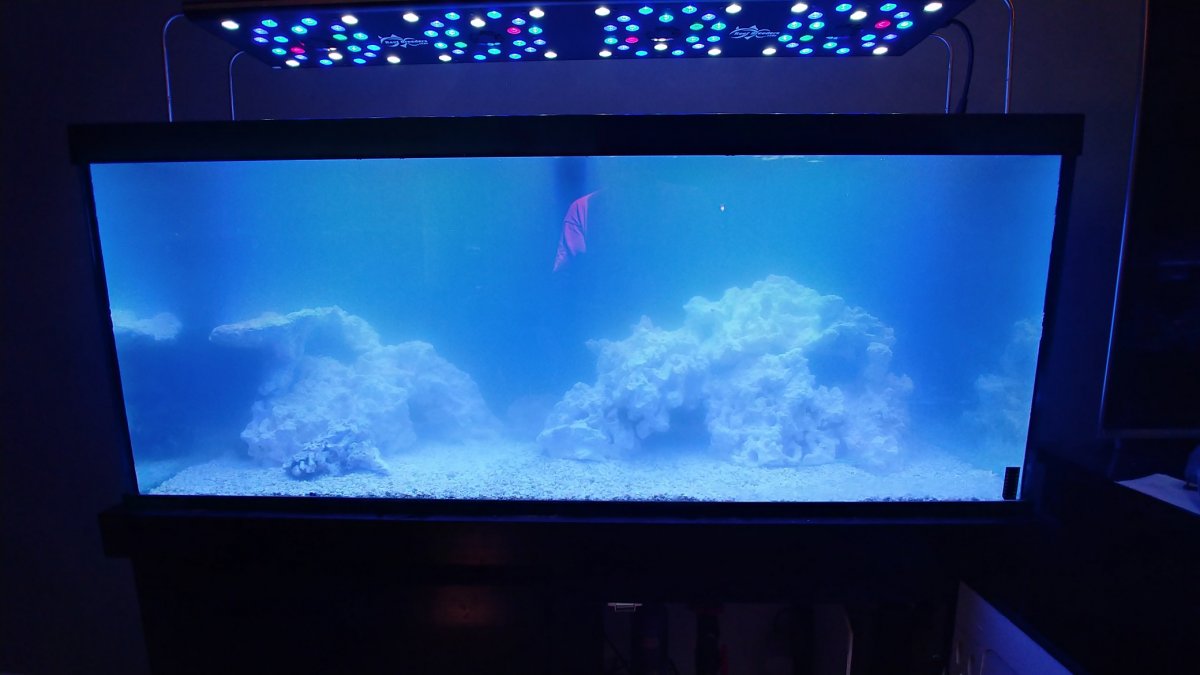 I also used leveling mat material on the 1/4 inch plywood I placed under the tank and this is the result. After filling and letting it settle for 24 hours this is the result. It's as close to perfectly level as one could hope for. I didn't even have to shim the stand at all. 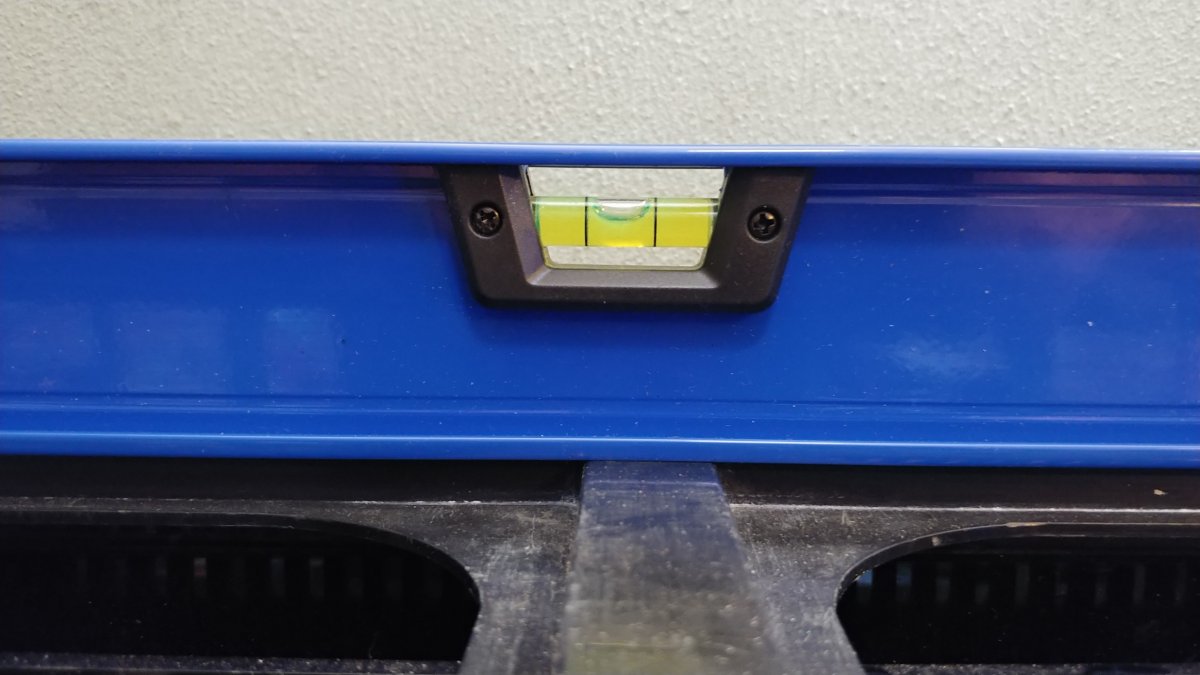 I'm on week three of the cycle so far and still waiting for the nitrites to come down...

I'll post up pictures of the nearly finished sump later today or tomorrow once I finish some cable management.

Looking good. Can't wait to see it again after the livestock has been added in.
OP

Thanks! Me either. Provided that the nitrites ever come down... Been sitting at a solid 4.5 for two weeks now with no hint of falling.... Meanwhile Ammonia is 0, and Nitrates continue to climb. They were at 80 yesterday.

I would go ahead and upgrade your powerheads if you're gonna be keeping a mostly sps tank. Those wouldn't move enough water for even a 40 breeder. However, if you're not going full blown sticks, then you should be fine.

I'll have an LPS dominant tank with just a few sps corals near the upper level. With that in mind the bulk of the flow is coming from the twin returns and with the pump at 50% it pushes a crap ton of water. The reason I went with the pp4's is I have one of those in my 40g and at 60% it's more than what I need. However later on if I find the pp4's are not enough I'll probably upgrade to the Current Eflux wave makers and tie the pumps in with a Loop controller or something.

PorpoiseHork said:
I'll have an LPS dominant tank with just a few sps corals near the upper level. With that in mind the bulk of the flow is coming from the twin returns and with the pump at 50% it pushes a crap ton of water. The reason I went with the pp4's is I have one of those in my 40g and at 60% it's more than what I need. However later on if I find the pp4's are not enough I'll probably upgrade to the Current Eflux wave makers and tie the pumps in with a Loop controller or something.
Click to expand...

Gotcha. If youre wanting to increase the flow down the road, you might also consider looking into getting two more of the pp4s. That way you can have a lot of different directions of flow, especially if they're all pulsing, and eliminate more dead spots.

Cody said:
Gotcha. If youre wanting to increase the flow down the road, you might also consider looking into getting two more of the pp4s. That way you can have a lot of different directions of flow, especially if they're all pulsing, and eliminate more dead spots.
Click to expand...

I decided to try the random flow generator nozzles a try for the returns. They are designed with a veined venturi that as water flows through them the direction is randomized. This creates turbulent flow patterns in the tank. When I leak tested the system I noticed that without the powerhead installed and having the pump set at 50% there was little to no dead spots in the tank. Of course this changes once the rock was added. I added the 1st of the two wave pumps and kicked the skimmer on then spent a fair bit of time watching the flow characteristics in the tank via the micro-bubbles the skimmer was producing. I was pleased to see that with the one pp4 pump at about 50% there is only one small dead zone on the left side with that pump under the shelf in the corner. I suspect when I move the second pp4 in and point it in that direction from the right side of the tank it will eliminate that dead zone. With both the primary pump and wavemakers sitting at 50% now, I should have more than enough in reserve to get the tank dialed in right once the corals are moved in.
OP

I also got the cable management done for the most part. I still have to move the second powehead over and wire in the battery backup for the pumps, but other than that it's coming along very well. 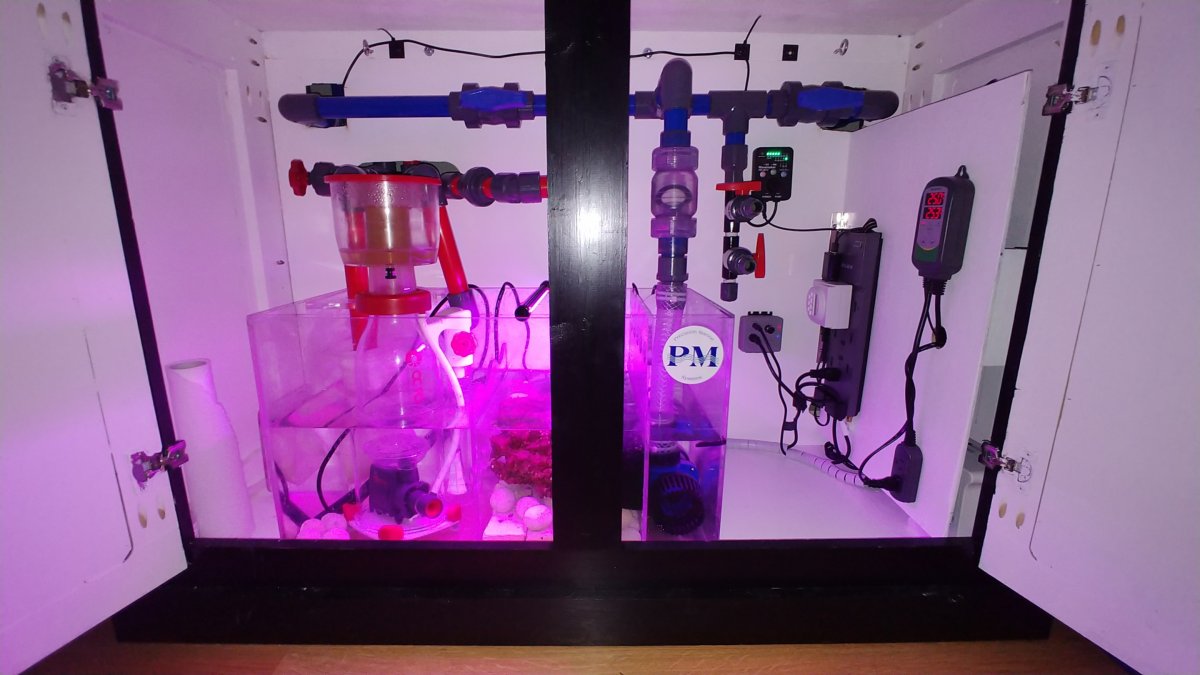 Coca cola should speed that along.

It seemed like this thing was never going to finish the cycle. Every day the Ammonia remained at zero, no ghost feeding, no supplemental addition of ammonium chloride, nothing, yet the Nitrite levels continued to climb. So much so that it was waaay off the chart. Nitrates also shot up to off the chart on two different test kits. Some said to keep waiting, that it would come down on its own. but after nearly four weeks and no signs of doing so felt I needed to do something. My powder Brown tang was going stir crazy in the 40, and had started nipping on the my galaxea corals. In the span of a few days despite having nori twice a day, and daily feeding, he had stripped two of three colonies down nearly nothing. I had to take him out, so it came down to a suggestion by Dennis at FJW's. He recommended waiting a few more days and if there was no change, do a large water change and start treating with Stability from SeaChem.

So on 4th of July I did a 50% water change and started dosing with Stability. Within 24 hours the nitrite level plummeted from off the scale to 2.5ish. After 48 hours nitrites now showed .25 and Nitrates down to 30. 72 hours later Nitrites now show 0.0 and Nitrates were down to 5... I couldn't believe my eyes. In three days the tank went from it'd kill anything I put in it to perfect. Even the phosphates were really low at .25... I must have tested it five times to be sure.

Tagging along. Just love seeing new tank setup and how people approach things different and end up with a great looking reef.
You must log in or register to reply here.