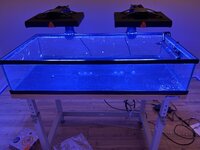 just testing out the lights, waiting for the tank to get here. Mid jan estimated delivery.

i think I have most my gear figured out
OP

BigRick said:
I have the one down on my waterbox 220 and its quiet and simple
Click to expand...

i compared the specs of the 320 vs the reef octo 150 i have and they seem to be inline with each other. So I guess i'll just stick with the reef octo for now. Worst case i'll just order the simp 320dc from amazon.

just testing out the lights, waiting for the tank to get here. Mid jan estimated delivery.

i think I have most my gear figured out
Click to expand...

That's a lot of light.
OP

sometimes you just wanna hit your sps with 20000 par

the tank mounts put wayyyyy more stress on the thin glass than i was expecting.

the tank mounts put wayyyyy more stress on the thin glass than i was expecting.
Click to expand...

Can you shim up some acrylic to take the stress off the glass? Hey even some 3D printing should work.

Great progress so far...I will never do LEDs again. For me T5s are dummy proof (especially dimmable).
OP

those lights aren't gonna stay on the frag tank. I was just bored and wanted to play with my toys lol for this frag/grow out tank i have a 24" t5 light I was going to put on it on one side, Maybe sell that t5 and get a 48" version.

The main tank is gonna go neptune sky. if I run into issues, i might do a hybrid t5 and led combo

Ordered 3 bags of sand. Going off someone saying 100 lbs should be enough. I have roughly 40-50 lbs of the carrisea stuff. Going for minimal sandbed. 1-1.5".

Hopefully I hear from waterbox soon. I keep coming back and forth between red sea reefer s and this tank.
Last edited: Dec 6, 2021
OP 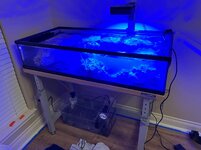 I started this just before the xmas party. Just plumbed it temp with whatever I had around the house. Big oof. Things leaked, was not a fun time. Setting up a tank before having to go out is a bad idea. Threw in all my dry rock to start curing.

Since then I fixed a few things, got some things on order and I'm going to replumb when I get the chance.

In the mean time I bought some fish. I wanted to TTM them right away but I wanted to make sure they were eating well. They ate pretty well, noticed some white spots on them after day 2. Meh. Skipped protocol and that's just what you get. So I moved all my corals to the frag tank and started doing TTM on the fish I have. I don't have many fish so its not a huge deal. 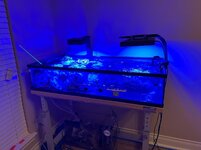 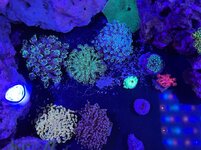 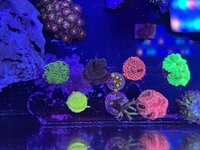 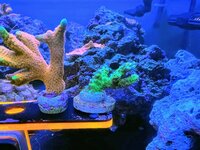 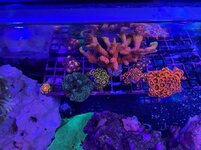 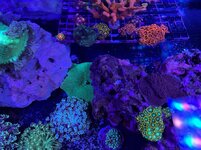 no real update on big tank. no word yet from waterbox. Frag tank settled out a bit and everything is opening back up. Not sure if its flow, new tank, or sky light but everything is coloring up pretty nice.

I got some zoas from cody back in august and never frag them out. They have taken over the frag rack. I'll eventually slice and dice em up when I get some more frag racks.

great idea on that table BTW. Always learn something or see something
OP

i have the tank herpes.

I have red planaria flatworms. Been turkey basing them out for the past week or so. Just when I thought Ive cleaned out all the visible ones out, the next day they seem to spread out even more. Gonna try flatworm exit. Hope i don't nuke the tank.

Back in December, I got up to .25 on phosphate and 20 on nitrates. The rock i've been trying to cycle has been leeching out phosphate and nitrate. Since then, I added some ulva and put on a 24 hour fuge light. Ulva has been growing like crazy in the past few weeks. Nitrates bottomed out and phosphates have dropped to .08 as of Wednesday. I've been dosing neonitro to raise my nitrates. Its back up to 8ppm. Some ulva made it way into the DT somehow and, ulva is growing on some if not all the rocks in the frag tank. With nothing to eat it, ulva has been growing rampant. I've cut the fuge to 12 hour off light cycles now. Jury is out on ulva. It grows fast, but pretty soon I'm just gonna have a frag tank of just ulva.

Added a co2 scrubber to my skimmer. My pH has been trending up lately. Peaks at 8.34 and drops to about 8.15 at night. My alk demand as spiked hardddddd in the past 2 weeks. Coralline algae has exploded and my two ice cap gyres are almost covered in pink coralline. To date, this has been the largest surge of alk demand I have ever seen in such a short time. This is also the highest I've ever gotten my pH to get up to. Before the mantra was, as long as your pH was between 7.8-8.4, you were good and keep everything stable. I'm still trying to keep things as stable as possible, but I am actively trying to get to 8.4 as best I can. Within a week and a half, I've seen one SPS coral almost fully encrust its frag plug to the frag racks. This is record speed for me, and I plan on keeping it going.

I have just been dosing kalkwasser to raise my alk and calc. But I'm getting to a point right now that its just too much kalkwasser. I'm starting to have to supplement with 2 part soon. I plan on adding a few more sps frags to grow out.
OP 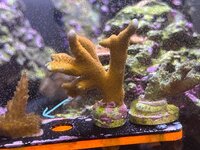 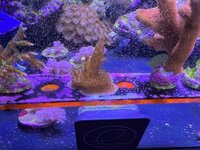 getting good encrusting growth, color is kinda poopoo but its getting good growth. I also need to clean my glass. 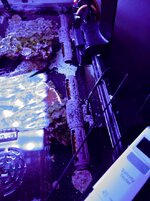 getting good encrusting growth, color is kinda poopoo but its getting good growth. I also need to clean my glass.

Lookin good, should pop that plug out and put a blank in it's spot see if you can take advantage of the overgrowth lol
OP

I have a Red Sea reefled 90 on one side and a Neptune sky on the other side. The sky side has a ton more coralline. All my LPS seem pretty happy with the reefled though.

eventually ill prob run a t5 for just nice blanket grow light
You must log in or register to reply here.