What To Collect On The Coast (1 Viewer)

I hope this helps everyone who would like to learn what to collect. There is so much life to collect on the coast, but you need to know what is safe for your tanks.

Here is one of the large clams we collected in Boliver. He is about the size of a dime. You can see his little snorkle on the left. We also collect the little pea size ones in the sand.

A decorator that has attached zoas to himself.

A Sargassum Nudibranch. I have not had luck with these in the past. I thought I would try two in my refugium this time though and see what they do. This one immediatly attached to the glass and has been eating with his mouth. The other went down the overflow and into the micron bag. I will get him out and put him in the sump with the cheato and carlupa.

The eggs (curly cues) of the nudibranch in the Sargassum.

A sargassum shrimp. These guys are great to have and fun to watch. I threw a bunch into the sump, refugium and main tank.

I picked up some Limpets off the rocks. You can also collect the keyhole limpets. The two keyhole limpet are marked by the blue arrows below. Once they blend in with the rock, the only time you will notice them is when they move. You will then see a white spot on the rock until they move back. These guys NEVER move more than an inch from thier spots. Then they move back perfectly in the same spot. Third pic down.

Keyhole Limpets, first pic is recently, second pic was when they were new. The Oyster above them died as they do not do good in our tanks. Water must be to clean. I have not tried target feeding the oyster to see if it would live longer. 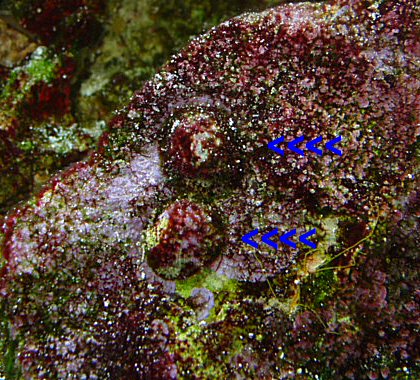 This is a Sargeant Major Damselfish. I put him in the refugium.

The Sargassum Angler. These fish need a tank of thier own. The will eat anything that is thier size or smaller. Feed only once a week as they need time to digest thier food. They are neat to have and watch as they are more active than other anglers. Didn't someone say they were showing up in some LFS?

The crab on the left is a Sargassum Crab, a good crab. The one on the right is a baby Blue Crab, A very bad crab. The main difference between the two is the good one a ROUNDED, the bad one is Pointy. The points on the sides of the Blue Crab is a dead give away.

A spheramatoid, which you can read about in this THREAD Link is invalid

A local Pistol Shrimp I caught on the Dike.

Local Pods. I will figure out an easier way to collect these guys. We also collect Mysis Shrimp.

Sorry for the bad pic on this one. I will try and replace it later with a better one. This guy is not like the rock anemones. It is not sticky and the body is leathery feeling.

The Molly Blennie. These guys gobble down every prepared food you put in the tank. I have not seen them eat any algea at all.

These snails are collected in the marsh areas. They mainly stay out of the tank water up along the edges. I've seen them clean the edges up some but they mostly stay closed up. I suspect they move along at night. Not really worth collecting.

These snails I collect along the dike. The act just like the snails above.

You can collect the Ghost Shrimp by the hundreds. They do well in your tank and can also be used as food. 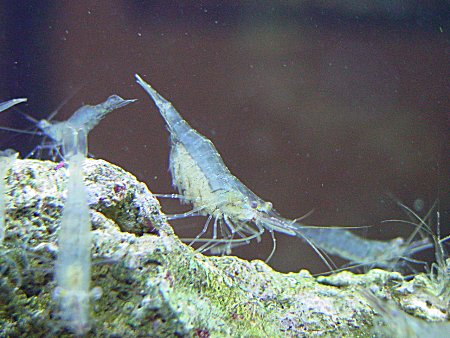 A Gobie you can collect in Galveston. He started to color up a little but was lost when the tank cracked.

A green Pod we collect on the dike.

Hermits can also be collected and they do well. But beware, the bigger they get the more they become a nuisance. These hermits will kill snails to get a shell. I usually add them to the sump. One big one and a few small ones. They clean up things well. If you put any in your main tank, make sure they are small. This one is smaller than a dime. Keep an eye on them. We do have two types down here. I will go out and get pics of both soon. One is the striped kind with pointy claws and the other is more rounded off and not pointy.

Rock Anemone. They can be collected off the Jettys at night. They are hard to get and you need to be careful as to not damage the foot. They come in reds, blues, whites and purples. They will eat fish and shrimp so be careful in your tank. I have not ever had a problem with them and now only keep one in my tank. They need to be fed a piece of shrimp or squirted with mysis and brine every once in a while. The more you feed, the faster they grow. And NO clowns will not host them. 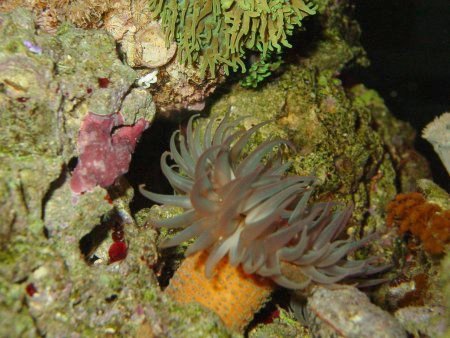 2 mouths on this one

The much sought after peppermints collected from the Jettys at night.

Pipefish. I have had good luck getting them to eat frozen brine. They need to be treated as seahorses as they are fragile. 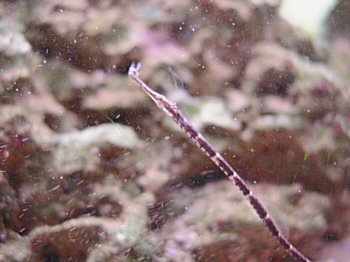 The Porcelain Crab. I collect these on the Dike. Once they are in your tank they will color up nicely.

A Whelk is a very bad snail. These guys eat meat and kill other snails to eat. 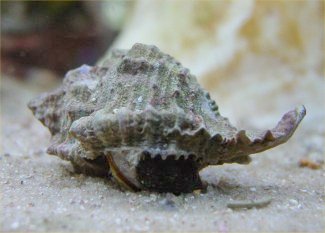 A Puffer Fish. These fish have never given me problems on the main tank. They grow slow and eat prepared food. The eyes are blue and the skin is smooth.

Rock Crab. Do not put these in the main tank. I keep one in my refugium only. They need to be fed once a week, piece of shrimp or fish. They come in a variety of colors.

I hope this helps everyone out this Summer as the sargassum rolls in. Most of this stuff you can collect at anytime. Remember, if you are not sure on what you should put in your tank, then ask here first before you put anything in your tanks. Try and post pics or refer to pics posted already.

I will post more pics as I collect this Summer.

Awesome, Mark!! This is stickied for the summer.
G

Incredible Mark, and thanks so much. This was so helpful! It looks like we will need you ask you to lead another collection trip.
G

Thanks Mark. That's exactly what I've wanted to know since I joined last year.
N

I am sorry if I repeat myself somewhere along the discussion boards here. I have lived here all my life and I am trying to figure out is the jetties the same thing as the Dike? I know where to get the Sargassum items-basically the beach. What I am wanting is the pepermint and ghost shrimp. Those are both at the jetties or the dike right? Sorry if I am confused, thats what marriage does.

I have not seen any peppermints at the Dike.

We do collect them in Galveston on the rock groins along the Seawall. Last year we collected them across the street from the Rainforest Cafe.

What about the ghost shrimp?
OP

The ghost shrimp can be caught all over. I have had the best luck though in the marsh area down by East Beach.

Go all the way down the Seawall to the dead end. Go left at the last road that will take you to the back of East Beach. Once you cross the bridge look to the left and stop at one of the marsh areas.

great info. This should be a permanent sticky thread
I

Fireater, Do you recommend a certain type net? I am going down there this weekend for some ghost shrimp for my eel and Sargassom fish. If you have a link or a place to get one, let me know what kind and where. Thanks. Arent you the one that took my chocolate chip starfish? Thanks

Yes I have him and he is still doing great in his 29g home.

You can get nets from Academy. They have long handle and short handle ones. The green square ones have net guards on the front to protect them from damage.

They also have white ones with long handles that are good for collecting. All the nets are in the fishing section.

thanks Mark...You have confirmed that I have some critters that should not be in my tank...
dang it all!!!
C

Since when did they restrict swimming along the groins? I was in Galveston on Friday and went to the groins where we'll be collecting on Wednesday, and they have my collecting spots roped off with big "No Swimming" signs. Can we ignore them?
N

That has been there since I can remember.

If the life guards are out they will come bug you and tell you to leave but they really cant do that much to make you leave.
C

They sure weren't there last year when I collected in that same area! Is there an undertow there or is it to keep you from hurting yourself on the submerged rocks?
OP

They have been roped off for many years. It's funny though the only time it is enforced is when a lifeguard is on duty.

I will call my friend today who is a lifeguard and ask him if they are allowed to enforce the no swimming. I believe he said they are not allowed to keep you from inside the ropes though. Last year when we were collecting and the lifeguard showed up, she said something to us about it. I told her yea, yea, we know and she walked away kinda mad.

Well he said they can keep you out of the roped off area. He also said it depends on the life guard if they allow you to get in the rope off area or not.

Sometimes they will let people snorkle along the rocks or collect, but it depends on the condition of the water, rough or not.

On another note, I caught a pistol shrimp today off the Dike just like the one pictured above.

Looks like you have a southern puffer and a sargassum pipefish.
There are many more pipefish along the Texas coast and two other types of puffer. That goby looks like a clown goby and there are several more that can be collected as well, naked, code, darter and a few others as well as clingfish and skilletfish.
In the spring I know of one person who caught a dwarf seahorse in Christmas Bay, but I have had no luck.
I also have a friend who was lucky enough to catch a small sargassum trigger that had managed to stay with a mat until it came in.
You can also get grey snapper, which when small are cool, but they will get big and mean.
A school of juvinile pompano is also very cool but they will get big as well, however when small they will school like chromis.
A small spade fish is also cool but not exactly reef safe. Spade fish are related to surgeonfish, same super family I think.

I will add pictures of fish that I have caught when I can find them and when I am at work so I don't have to deal with dial up.
Mike
You must log in or register to reply here.