What To Collect On The Coast (1 Viewer)

I go collecting in galveston quite a bit. If anyone wants to come along they are welcome. The best time is mid-march till early may. It's too cold before, but too hot after in the shallow bays. For a real fun time, go about midnight, and you get a totally different batch of fish.

Note; peppermint shrimp collected from the jetties are not use to seeing corals, and so they will eat them. You're far better off getting a real pacific peppermint and saying you caught it yourself. No one will know and they are tank-safe.

Hmm, I have had the opposite experience. I had a Perrpermint from Indonesia and he did not eat the Aiptasia. But the ones from Galveston did and they have not bothered anything else. Actually, one did take a liking to my candy canes but he was banished to my sump. The rest have been good reef citizens.
H

everything i've read says that peps from the pacific dont' eat aiptasia...only peps from the atlantic and carribean...i haven't had a problem with the few that we cought from galveston...and the ones that i bought haven't touched the coral either...could just put them in the fuge, and move aiptasia rocks down there one at a time

You just train the peps from galveston and they are fine, I have not had any problems with mine either. cant wait to get back out there and catch some more for this year.

On another note, has anyone else picked up those Olive Snails in Galveston? Last year I came across 2 but have since lost due to accidently trapping then under some rocks when I re-aquascaped :-(
They are terrific sand sifters but can/will eat smaller snails, bivalves and hermits. Still I want some more!

Im at galveston right now going to see if I can catch anything...
Z

Where exactly do you guys go to? I am not familiar with galveston at all, we went to the Texas city Dike today and got this school of fish, a big surge wave came in and they got stuck like 30 feet into the beach so we brought them home, there currently in my QT until I figure out if they are safe for the display, they school very nicely and are silvery, I tried to compare them to the common minnows but they look different, I'll get a pic up as soon as I can.

I think I know the fish you're talking about, but I'm not sure what they are.

I go to the jetty in front of the Rainforest Cafe', like most others on here.

I want to take a trip to the coastline this weekend to collect some specimens. Can I get some google mapped suggestions on where to go to get what?

I'm not familiar with the area so saying seawall and stuff like that is foreign to me.

LOL! So you've never been to the Galveston beach? If you take I-45 south, once you get into Galveston Island, any of the main streets from 61st on down will take you to the Seawall. One of the common places to collect is right in front of the Rainforest Cafe which is on Seawall Blvd and 53rd street. You go out and look on the rock jetties at night and you can catch lots of fish and maybe shrimp with your nets. Best time is when the winds and waves are down.

There are a few other places along the bay side of the island that you can search for fish and stuff during the day. Another place we've been is at the end of Airway Ln over by the airport off 99th street. Just search Airway Ln, Galveston, TX.

Just make sure you bring everything you might need. Here are a few things karlo listed before:

I'm sure others have more locations, such at the east end of the island and a few other places out west.

Thx! Will post pics of what I find.
R

I've just moved to the island and can't wait to get out there and see what I can find!!!!
A

i'd like to get out there this weekend, but i'm not sure how much we'll find with all this heat...
O

i'd like to get out there this weekend, but i'm not sure how much we'll find with all this heat...
Click to expand...

I ended up having out of town guests come in for the weekend and didn't get to go out. However, I did go to the Pensacola coast. Picked up some baby pompano and hermit crabs. Stopped in Biloxi and my brother gave me a bunch of his coral frags. I posted some pictures of those in the Photography forum.

When I got home, the pompano and hermits looked too intimidating and I figure it was best to keep them in a separate tank away from my tropicals.
A

We went collecting last night and stocked up on peppermint shrimp. We collected 200+ peps. Before you tell me that's irresponsible, let me make it clear that I don't care and I won't respond to any comments. The peps were split among me and my friends and cousins. I took about 50 for my tanks, both for cleanup duty and as probable snacks for my wrasses and other fish.

All 200+ of the peps were caught in pretty much the same hole between the same rocks on a rock groin on the Seawall.

We stopped first at Airway Ln where we caught 50+ ghost shrimp, plenty of tiny/small hermit crabs, and about a dozen porcelain crabs, and a pistol shrimp.

On the jetty, we caught probably 30 blennies (size 1/2in to 4in), but only kept 6 of the smaller ones. We also caught 6 sergeant major damsels.
O

Hope me and the boys have some good luck tonight.
T

I live on the island and I have a Naked Goby in my tank that we caught in the backyard off of our bulkhead. I think we're going to look for some peppermints this weekend. Only other local items in my tank now are grass shrimp. They are great little cleaners! 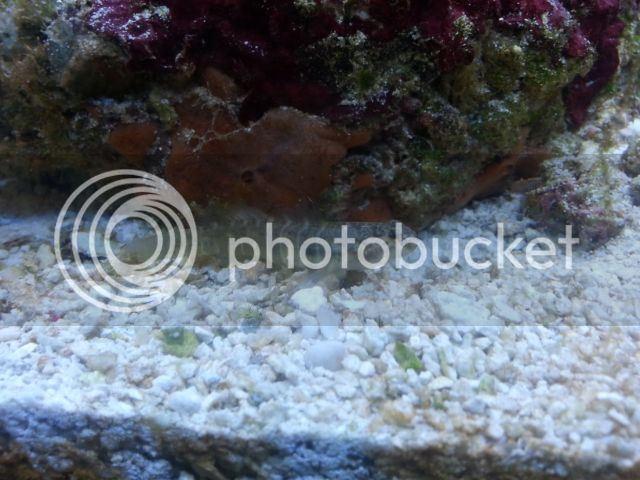 How cool is that! Local critters...
You must log in or register to reply here.