Which Test is Correct...and Who do you trust? (1 Viewer)

I've been wanting/needing to post this for a while. For a year now I've been fighting some sort of water chemistry issue. Not sure if there's something in my tank water that is bad...or if there is something that is missing that my corals need. I lost 37 zoa colonies and a handful of LPS last year. The rest of my LPS seem to be doing great and are growing. The few SPS I have are growing, but no longer have PE that they once had. My anemones are doing great and the mother colony has split 4 times. I have 2 zoa colonies that did survive though. One looks pretty good but I know could have more PE but the other one opens up but just doesn't have the glory it once had with color and PE. Many of the blue/green mushrooms have detached themselves and dropped to the bottom of the tank. My green toadstool opens up every day but doesn't extend like I know it can.

I went through another round of home and professional tests back in September and the results were interesting, extremely confusing, and difficult to figure out which test is the most accurate, which is why I am making this post. All the water samples were collected at the same time. I was very surprised by the wide range of data points between all of the tests. 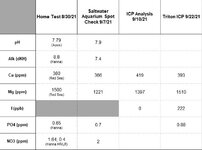 So, the question is, which test(s) would you trust? And note, all of the reagents for my home tests are in date. Seems to me that most of the data points for 2 of the professional test are pretty much worthless. And some data points have me so completely confused, like Iodine. One test showed zero and the other one showed it to be 10 times higher than it should be. What in the world do I do there? Curious as to what y'all think overall.

I've never had total faith in the ICP tests (either company) because when I took chemistry in college and we ran ICP tests, we purged the instrument with nitrogen for at least an hour before we could run a test. I have heard thru the grapevine from people in the business that it's possible they are running these tests back to back without purging in between. How could they if it took an hour to purge? Therefore, your sample gets contaminated from the previous sample and therefore the results can be less than accurate.

Unless they have come up with a super duper instrument in the last 20 years since I took chemistry, I'd wager that is why your samples vary from company to company and test to test. There's pretty much no way they can run an accurate test for $20 bucks and process enough of them a day to make any money.

Now we have to have some sort of reference and something is better than nothing but it is a little disappointing if you are hanging your trouble shooting process on this test. I wished someone from one of these companies could comment and prove me wrong.
S

Another thing is the delay. When testing seawater at sea, testing is done immediately on the boat, so that re-mineralization is kept low. But when mailing it in for testing, the nutrients will always be higher than what they were originally. As long as that's understood, the tests can still be useful.

Take all of those and average them together. You are looking for trends, not absolute numbers. Or, you could just pick one, stick to it, and look for long term variations rather than test by test variations.
You must log in or register to reply here.