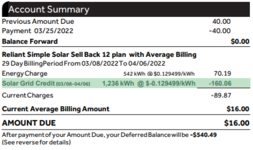 Hey @foos what software platform are you using for that big visual dashboard? I don’t see that in my Tesla app.

I don't have it running right now since I had it stand alone on one pi and I want to re-do it on my high availability cluster, but I was using this project: 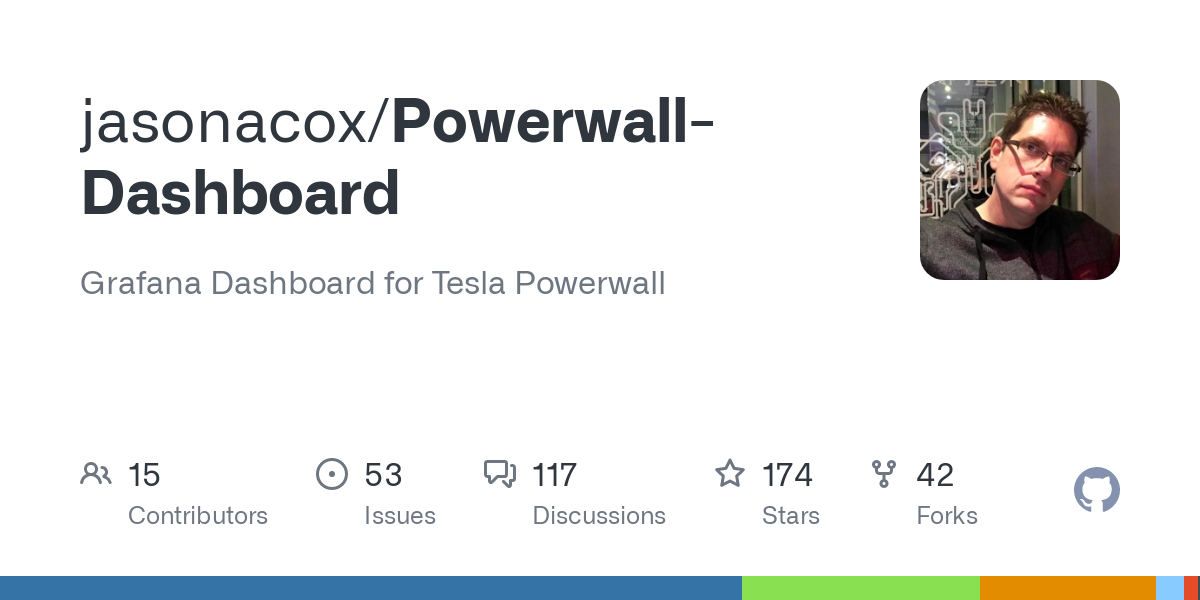 Grafana Dashboard for Tesla Powerwall. Contribute to jasonacox/Powerwall-Dashboard development by creating an account on GitHub. 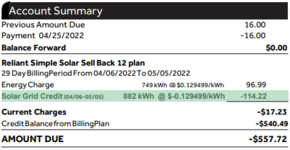 is there any kinda provision for you to use your own batteries with the tesla system? or are you locked into using power walls?

If you are talking whole house backup, I would go full tesla system with a local installer. It would be doable with your own batteries, but you would have to do it yourself, really know what you are doing, and risk pissing off the state, city, insurance, and power company.

If you want solar and just enough batteries for tank backup, you could still do it with a single powerwall and a critical loads panel. Could also do it yourself if you know what you are doing. You could tap into the dc side of the solar inverter and use that to charge batteries to run a tank inverter. Basically build your own ups with a very large battery bank.

Issue is tying your batteries into the solar if you want them to charge when the grid is down. Stand alone Tesla solar would use stand alone Tesla inverters which have no provision for charging a battery. They are meant for an a.c. coupled system. So to work off grid you would need an inverter/charger for the batteries that can control a.c. coupled solar inverters. Then you may also need to add a mains disconnect system since that will probably not come with Tesla stand alone solar.

Basically, you can probably do it, but you will need to find a local installer that knows how, or do a lot of research and do it yourself. Tesla powerwalls may cost more than a diy, but you get an integrated system meant to be able to work with the grid down, a warranty, and a battery pack from a company with more experience with large battery packs that probably any one else.

when the grid is out. do the panels directly charge the battery?

i'm hearing conflicting information on what happens when the grid is down.

That is my system with the stand alone Tesla inverters that are a.c. coupled to the batteries. The new powerwall+ shares an inverter with solar and can actually throttle solar directly without frequency changes holding your batteries at 100% as long as there is enough sun to do so.

My system, solar sends power to house, battery sends or takes power from house and ups frequency to shut off solar if near full since once full there is nowhere for extra solar to go and that is not good. Powerwall+ solar and battery send power to fancy inverter and that inverter sends power where it is needed and can precision throttle solar instead of just up and killing it.

I was reading about someone and a generac pwrcell system. I know its not a tesla solar system but apparently he said that there was no way to run the system when the grid was down.

He said when the grid was down the whole system shut off as a "safety" precaution. What good is a solar system that can't run independent of the grid.

I was strongly considering running an off grid system to lessen my worries about needing so many permits. But having both would be ideal.

Solar without batteries cannot run off grid. Solar by itself does not throttle, and is required by law to shut off if it does not detect a grid to prevent back feeding and killing a lineman. The generac system with battery should be off grid capable unless it was not set up correctly. I dunno much about it though. The max output of the batteries was rather low so I stopped researching it.

The version of the Tesla system I have, when there is a grid issue or the grid goes down, the main box opens a contactor disconnecting from the grid entirely, then the powerwalls start to generate power and if they have space to charge they generate it at 60Hz. This way the solar see's a "grid" and outputs power. You basically form your own micro grid with the powerwalls controlling the voltage and frequency. When the grid comes back up it has a sensor on the grid side of the contactor that detects that, and it goes into grid syncing mode. Frequency will go up or down a bit to get your house in lock step and synced with the grid. Once it does that and the grid has been stable long enough it closes the contactor connecting you to the grid, and the powerwalls stop generating power and start charging off solar if you have it in backup only like I do.

So, if you are wanting to go solar and want batteries for it to work and keep things running when the grid is down. My recommendation is local install company, as much solar as you can fit on your roof without putting it in stupid areas, then at least one powerwall+, more if you want to back up everything and/or get longer run times. I have 3 and can run everything including airconditioner running non stop for 12 hours with zero solar. Actual runtime is longer than that, and ymmv.

As for the permits, if you do the install yourself it will be a nightmare. If you get Tesla stuff you will need to have them or a certified reseller install it for you and they will handle the permits. Tesla will be cheaper, but take longer and their support is notoriously bad. A local installer will be quicker and have better support, but cost you more. The most frustrating part will be waiting for permission to operate after it is all setup since that can easily take over a month. The new powerwall+ system allows you to cheat that since it can throttle the solar so you do not feed back to the grid.

I have a coworker that got a single powerwall and solar from a local installer. Got a rather small solar setup since it was required. He just wanted the power wall to backup his fridge and what have you for outages. He is overall happy with the system and has no regrets but was frustrated waiting for permission to operate even though the installer he used paid his loan till he got permission to operate.

getting a few quotes now. kw solar, trismart, and tesla

KW solar is suggesting I get an enphase battery system. I asked if there were any provisions to charge with a generator if things get really dicey.

since you have the powerwall system. are there any critiques you have with it? if you were to do it again. what would you change knowing what you know now

Enphase is a brand a lot of people seem to like. Seems they do have provision for a generator but their max is 4 batteries for 40.3kWh storage, 15kVa continuous draw 22kVa peak draw for 10 seconds. Tesla you can get up to 10, I have 3 for 40.5kWh storage, 17.4kVa continuous, 30kVa peak, and 106LRA start per powerwall which is something like 76kVa for starting airconditioners and things like that.

So yeah, when comparing a 4 battery Enphase is almost as much as a 3 battery Tesla with powerwalls. Powerwall+ is same storage as the powerwall, but higher draw capable. 4 battery Enphase is maxed out system, Tesla can go to 10 and really if money is no object there is no real limit to theirs.

In hind sight, the powerwall+ was released right before I got my system, and I should have gotten two of those with two powerwall addons. Powerwall+ is basically a powerwall with an external inverter that is fancier and can take solar, and you can tie additional powerwalls to that inverter. I probably would have done a local installer as well. Their installers were good and professional, but support and communication with Tesla can be horrible. Tesla, great product, great people, absolute garbage support and communication on the status of the project.

My friend that just got a powerwall, he wanted enphase to start with but he could not find anyone with one in stock or could get one any time soon. He did find an installer with powerwalls in stock. When getting your quotes I would ask for a timeline and if they have stuff in stock.

Also, Tesla powerwalls seem to have generator provision in the api, but dunno if anyone knows how to use it. People have found ways to add it sorta. There are 12v grid tie solar inverters and people will connect one of those to their house, start their car, and power it off the car. Basically turns the car into a generator that can charge the powerwalls. Have to be sure you do that right though so you don't nuke your cars alternator.

If you want to do full house backup and want the ability to turn off loads automatically as batteries get low with the Tesla system, there is this: 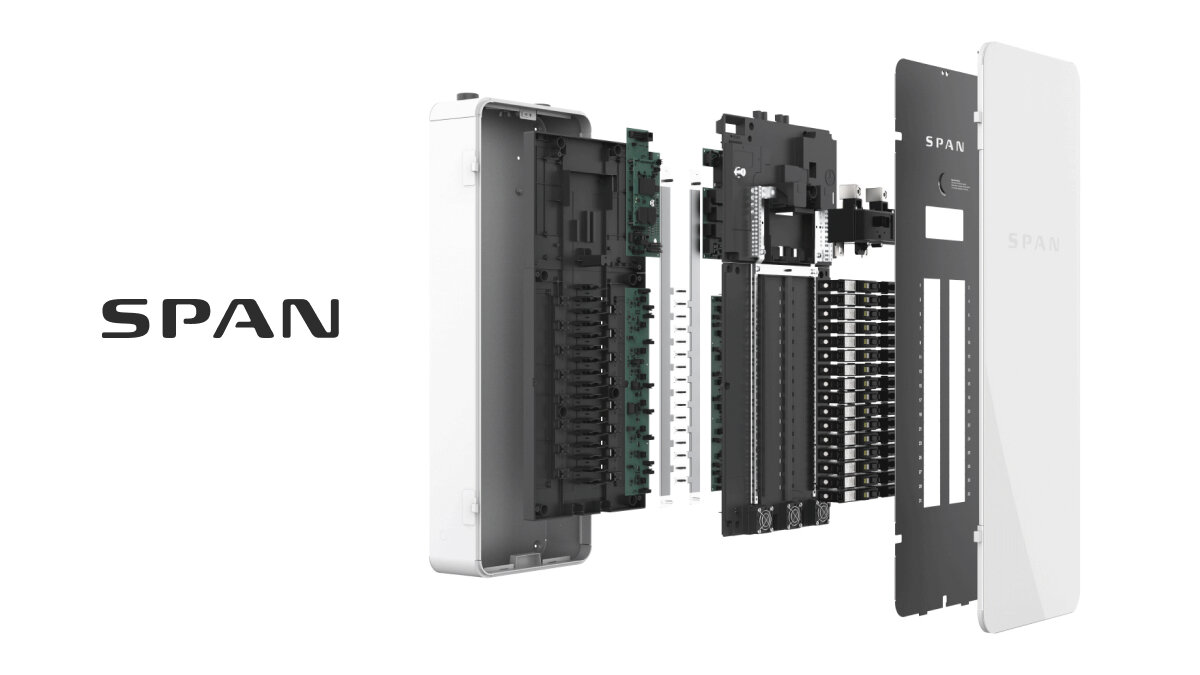 Span reinvented the electrical panel. Control every circuit in your home from your phone. Contact us! 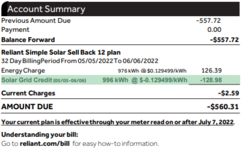 how many kWh have you been making so far