During the last Neptune's Live Stream, Terrence announced that the WXM is being discontinued. He explained that EcoTech has made it clear they don’t want their products to work with 3rd parties. Sadly, this was under speculation for a while after EcoTech refused to allow the WXM to control the Vectra, then the Versa, and now the G5 lights that are Bluetooth only.

Some companies have been playing hardball for some time instead of trying to be collaborative so the end-user could have multiple products in a cohesive system.
I was actually expecting Neptune Systems to expand and deepen collaborations to increase compatibility with even more products, but with this "curve-ball," it will be interesting what they will do and what we will see in the market with future releases.

It is disappointing for those of us who are heavily invested in EcoTech as this may force me to consider other options when I decide to upgrade my lights. I don't blame any company for wanting a larger piece of the pie though. This industry surprises me every day.
Being in IT and having to use multiple applications to monitor thousands of devices, I surely appreciate it when you can have control under a single pane of glass. (Our industry seems to be going the opposite way and everything being standalone).

This being said since six of my ten Radion G4 Pros are brand new, I hope the technology is pretty far more advanced to the point where I have to upgrade the entire monitoring system anyways. In the meantime, I think I will need a spare WXM just in case!

Wow...the reason I use MPs is because of ease of use with WXM otherwise tunze all the way. Another way for Neptune to push people to upgrade to the new radions.

So my MP60 was making a grinding sound and the replacement dry side is not available anymore at the ecotech store. I spent over $700 and pump is pretty much useless at this point.
B

Wow, this is disappointing news. I use the wxm module to control my G4s and my MP40s. The only reason I did not go ecotec for my return pumps was because I could not control them via the wxm.


Sent from my iPhone using Tapatalk

Bigfishy said:
Wow, this is disappointing news. I use the wxm module to control my G4s and my MP40s. The only reason I did not go ecotec for my return pumps was because I could not control them via the wxm.


Sent from my iPhone using Tapatalk
Click to expand...

Make that three of us. Regardless, you can do some really nice automation with the Apex, so it is still very useful.
As for the other gear, I am trying to think of it as "redundancy" if the Apex fails. Doser, Pumps, Heaters, ATO, KHG being stand alone.

I was very happy with the older gen maxspect gyre 280 in the 500/g and the wide flow was amazing. I did not even clean it for a couple of years without any issues.

Maybe they got a new big whig that came from Apple. They took away my headphone jack, called it a brave new step forward, then raved about how many wireless headsets they were selling. Well, no joke. You took away the customers option!

The difference is that Apple has a massive fanboy following. Let’s see if Neptune’s flex works.

Its not really a neptune issue. Its an ecotech issue. Ecotech doesn't want to play ball. All of their newer equipment is NOT APEX compatible. What is neptune supposed to do?

I'm sure they see dwindling sales for the wxm. Its a correct move on their part but unfortunately we all lose because ecotech won't play nice.

I would add - vote with your $$. Ecotech isn't all that... If ecotech see's sales dwindle because of their inability to work with others they will come around.

RR-MAN said:
Wow...the reason I use MPs is because of ease of use with WXM otherwise tunze all the way. Another way for Neptune to push people to upgrade to the new radions.

So my MP60 was making a grinding sound and the replacement dry side is not available anymore at the ecotech store. I spent over $700 and pump is pretty much useless at this point.
Click to expand...

This sucks, but like others said... vote with your money. Sucks what Ecotech is doing but they feel they don't need neptune clearly.

Too bad they can't just all get along and have open standards.

Pretty much. They could not tell me when it will be back in stock and that was 3 months ago.

This is today’s screen shot-SOLD OUT 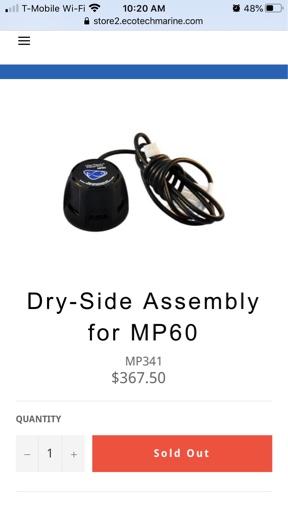 Just order The bearings from boca. The model # will be on the bearings to help you order. I would also measure the old bearings with a micrometer so you know you’re getting the correct bearings. Boca uses stock photos on their site that aren’t indicative of what you’re actually buying. The good mp40 bearings still aren’t in stock

Just spoke to ecotech - they don’t know when MP60 dry side will be in stock.
OP

I would imagine the shortage of MP60 or other parts is based on Covid19 and the lack of items being imported from China. Kind of like Academy being out of bicycles... same concept.

Well I am not a fan of neptune due to their 1 year warranty and parts that only last just over a year. So if some company doesn't want to work with Neptune...well, neither do I! I was assuming that Ecotech would have a competing controller before much longer but you can bet I will NOT be jumping on any expensive controller without seeing a nice long warranty...yeah right!
OP

Most products have a 90 day warranty (Even high-end and more expensive products as well). 1 year warranty is not bad unless you are expecting to abuse it.
I have done my homework and like it or not, there is currently no controller with as much flexibility as the Apex. If you don't need integration and automation to a certain degree, you don't need an Apex anyways.

I agree that most things have a short warranty but we are talking about a piece of technology that is supposed to be designed around humid saltwater environments. You cannot really put it in a sealed box or it would overheat. If you have ever looked at the inside of LED submersible trailer lights the entire board is sealed in epoxy. Neptune could have done that on their energy boards....there are ways to fix the problem. ok I will shut up now.
You must log in or register to reply here.