frankc said:
Let there be light! I got three Maxspect Recurves, and they're pretty cool. They are basically a Razor with an LED strip added on each side, intended to simulate a T5/LED hybrid but with only LEDs. I need each one to cover an area 28" wide, and it looks like these will do it. Unfortunately the red channel on one of them doesn't work, so I'll have to send it back.
Click to expand...

Do you think that's ample light for your tank Frank? How many fixtures?

RR-MAN said:
Do you think that's ample light for your tank Frank? How many fixtures?
Click to expand...

I sure hope so. I just put the one on for the picture to get an idea of the spread, and it looks like it covers about a third of the tank, so I think the three fixtures will work. I'm sure some areas will be somewhat brighter than others, but that's okay because I like a mixture of corals and there are always some that like less light than others.
OP

Let there be life! I finally got a very small start on putting critters into the new tank. I don't think this gorgonian was in there an hour before it started putting polyps out, so I think it's happy in its new home.

Hmm, maybe I should stop here and have the ultimate Zen tank. I could spend my days raking the sand, then letting the Maxspect Gyre smooth it out so I can start all over. 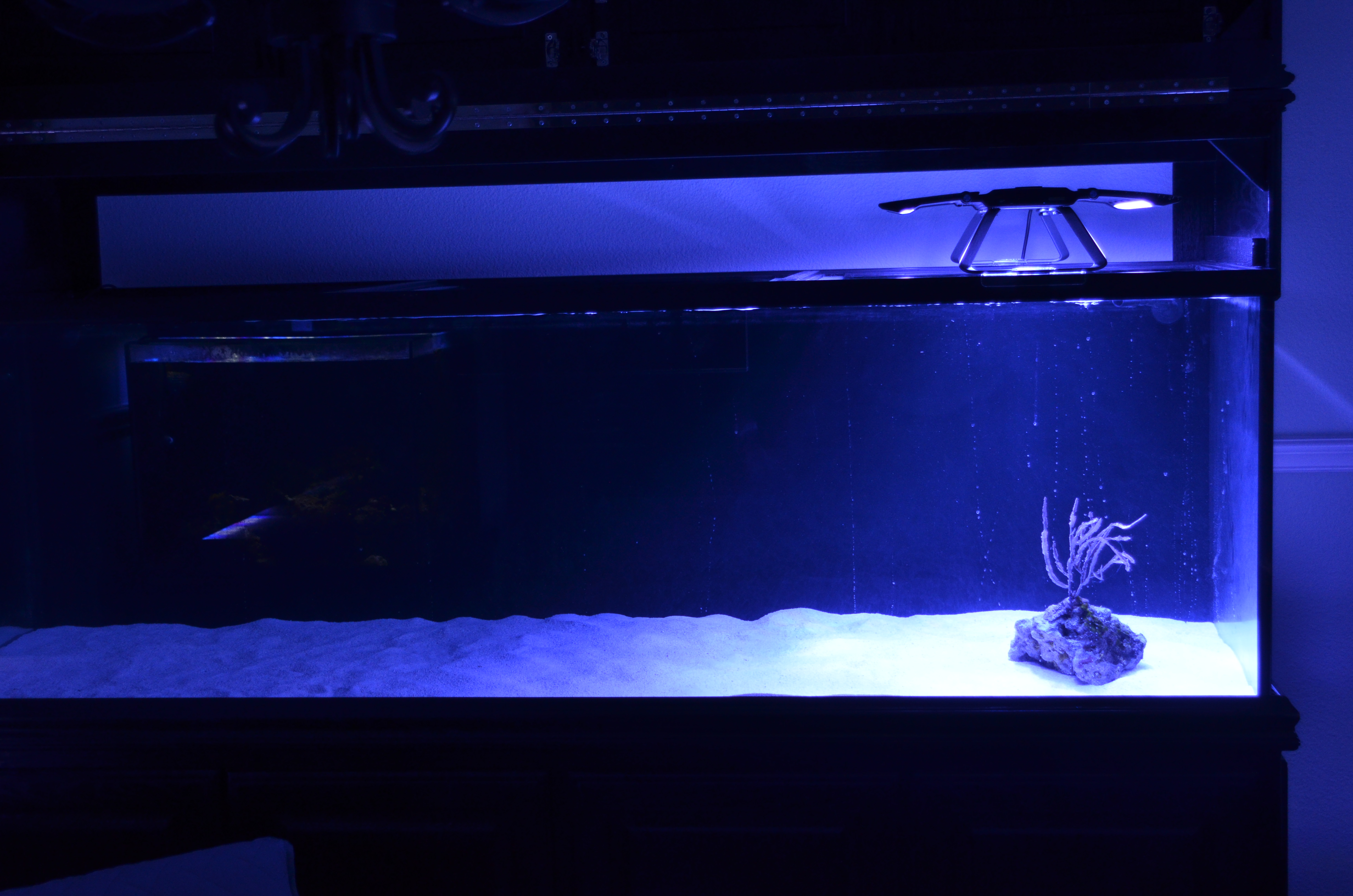 Here it is with the aquascape more or less done. It took basically the entire weekend. It's so hard to decide where each rock should go and how to position them. It's also hard to find the balance between aesthetics and function, and I tend to err on the side of making sure every fish has plenty of hiding spots, as well as places to put future corals.

Dang, the spotty glass looks so much worse in pictures than in person, but I didn't bother cleaning it yet because there are still quite a few corals to be transferred.

And if anyone wonders if Clarkii clownfish bite, yes, they do. I did not want any fish in the tank until the aquascaping was done, but I accidentally scooped up the clown when I moved the anemone. She spent Saturday afternoon attacking me any time my hand was within two feet of the anemone. She never drew blood, but did remove a micro-thin layer of skin.

If the lighting looks a bit odd, it's because I am using an old Razor whose blue channel is dead in the middle until the replacement Recurve comes in. 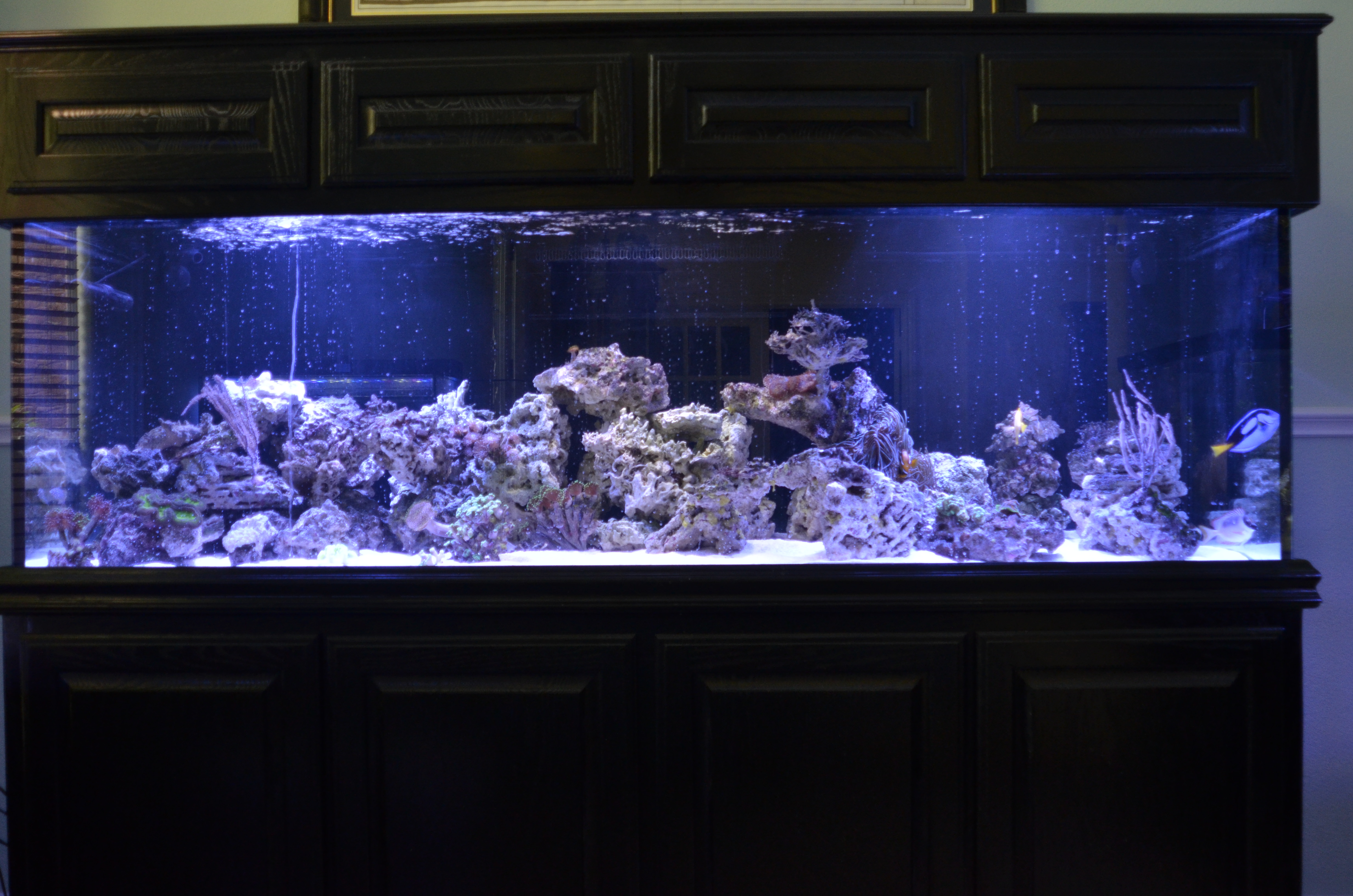 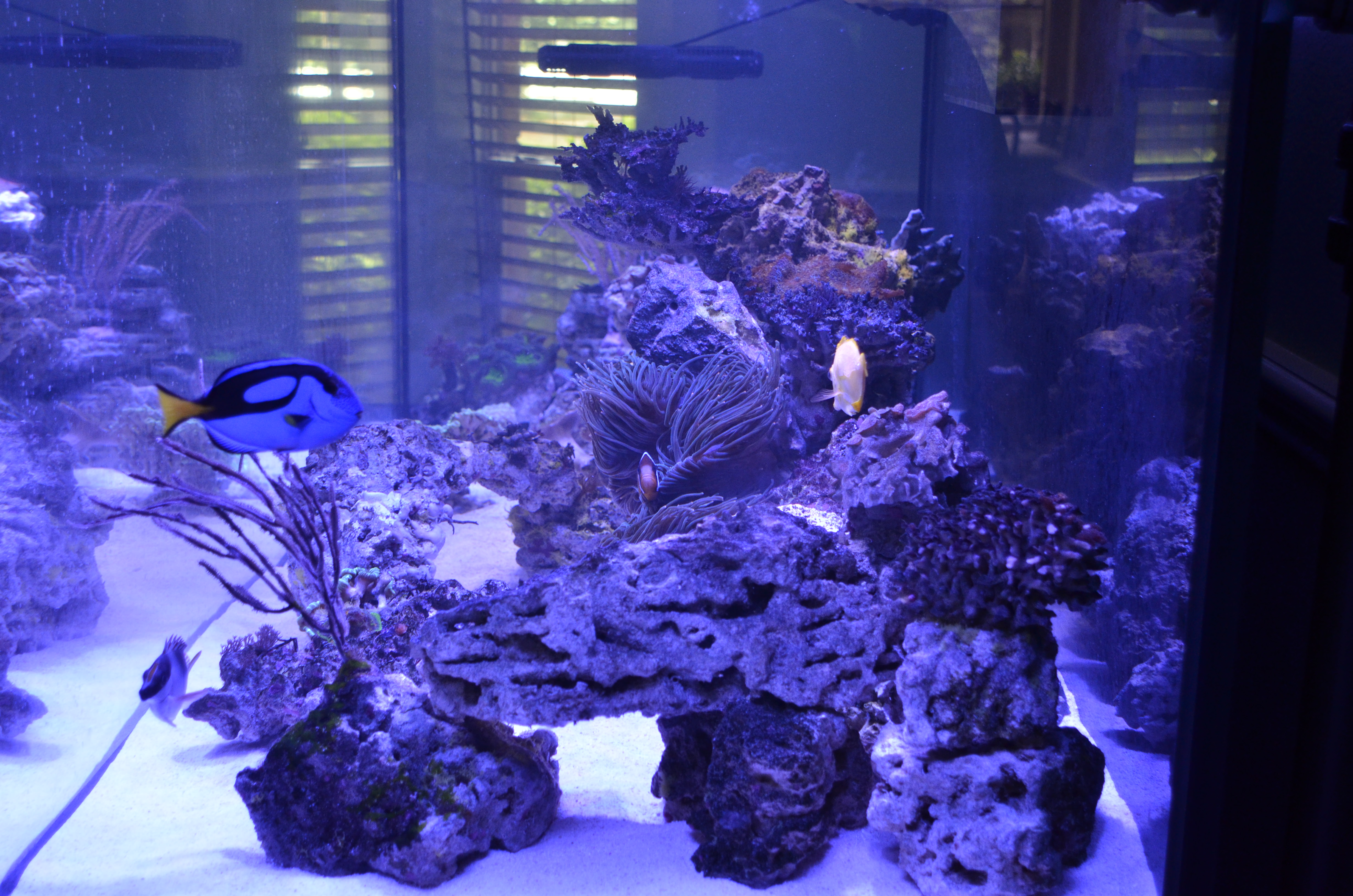 Awesome! It's hard to get a view of it from the front (I'm sure the dirty glass is to blame), but that side shot looks great.
OP

This organ pipe coral is almost growing too well - with new polyps sticking out every which way, it's hard to see the tube structure that makes this coral so cool. 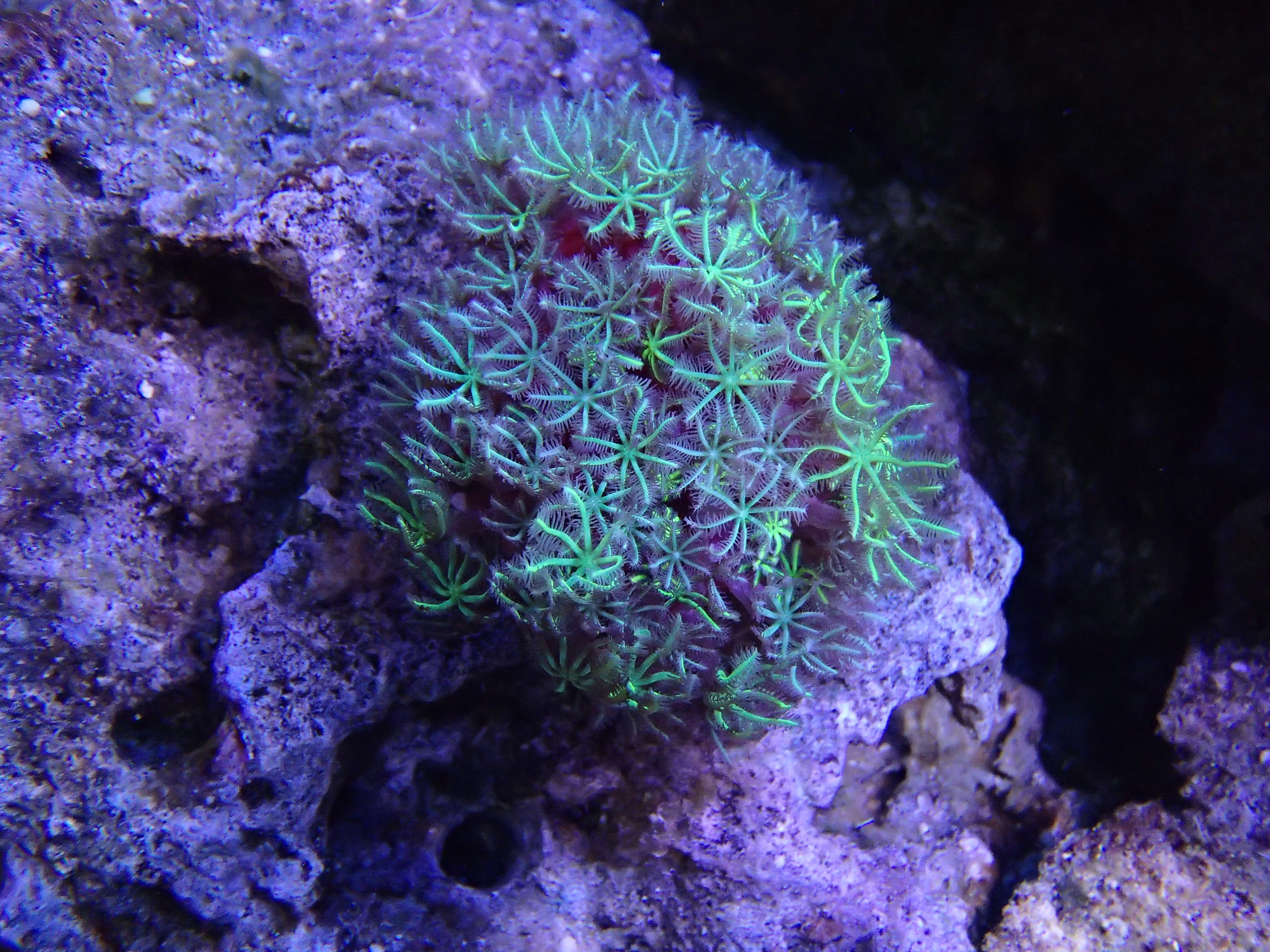 However, I caught it this morning with almost all of the polyps retracted, so you can really see the structure. 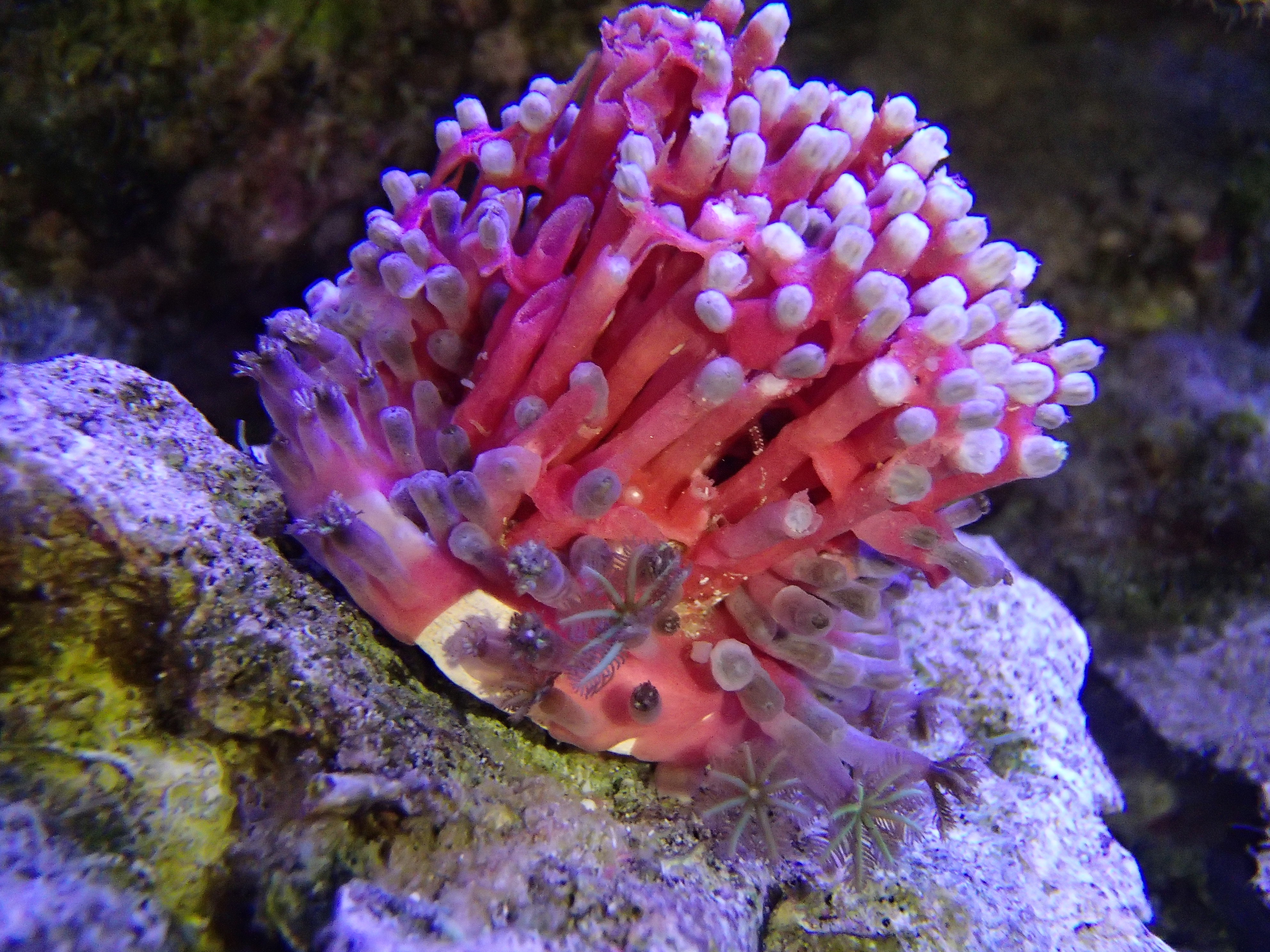 frankc said:
We now have appropriate seating. We just picked up the new cushions for these old bamboo chairs today. 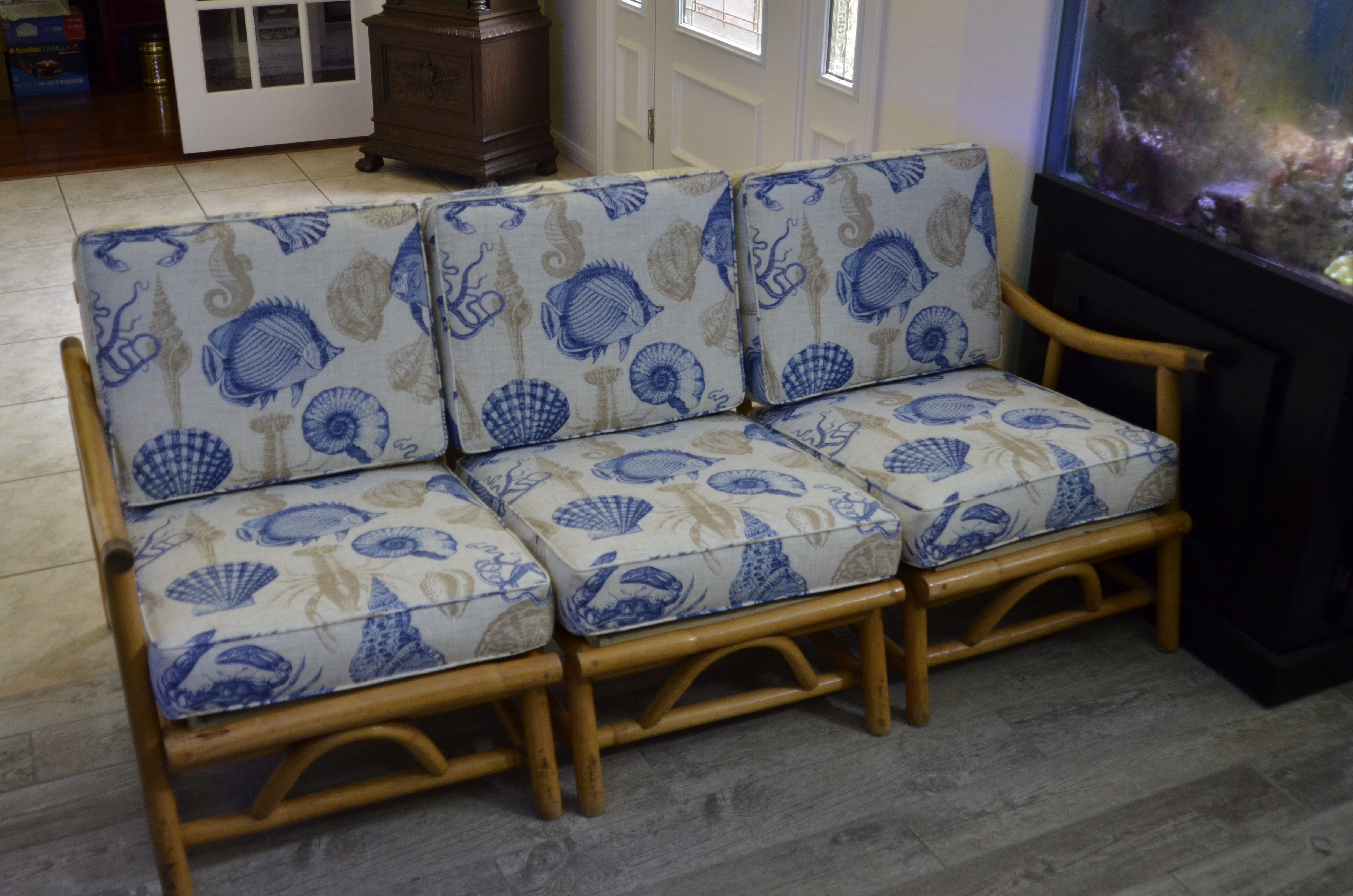 Tank is looking sharp. I love the flooring that you have too. I'm looking to do some wood tile that's a similar color profile as well.

Cody said:
Tank is looking sharp. I love the flooring that you have too. I'm looking to do some wood tile that's a similar color profile as well.
Click to expand...

My Parents are doing wood tiles too! Lol I think they are going with grey, but I don’t really care, just want that to happen so I can get a 200! Lol
OP

Thanks. Yea, we love that tile. It looks great, and it has enough texture that it does not get slippery when wet, which was especially comforting when the old 300 was leaking all over the floor.

It was painful pulling out the perfectly good wood flooring that was there, but that would have looked terrible by now.

How are the lights working for you Frank? Pics look nice.
OP

RR-MAN said:
How are the lights working for you Frank? Pics look nice.
Click to expand...

Thanks. I'm very happy with them. There are definitely some shadowy areas between them where the braces are. It would be better if it were a 6' tank or I added a fourth light, but at $799 or whatever I can live with less than perfect evenness. They bring out the colors nicely, and some corals that were just doing ok under the Reefbreeders on the old tank are doing much better now. I need to get off my butt and program them - I'm currently using the SPS default program, which leaves the violet channel on at 1% all night, and I wonder if that is contributing to my algae issues.
OP

When an ordinary mushroom tries to become a bounce mushroom. I have lots of these shrooms, but only this one is doing this. 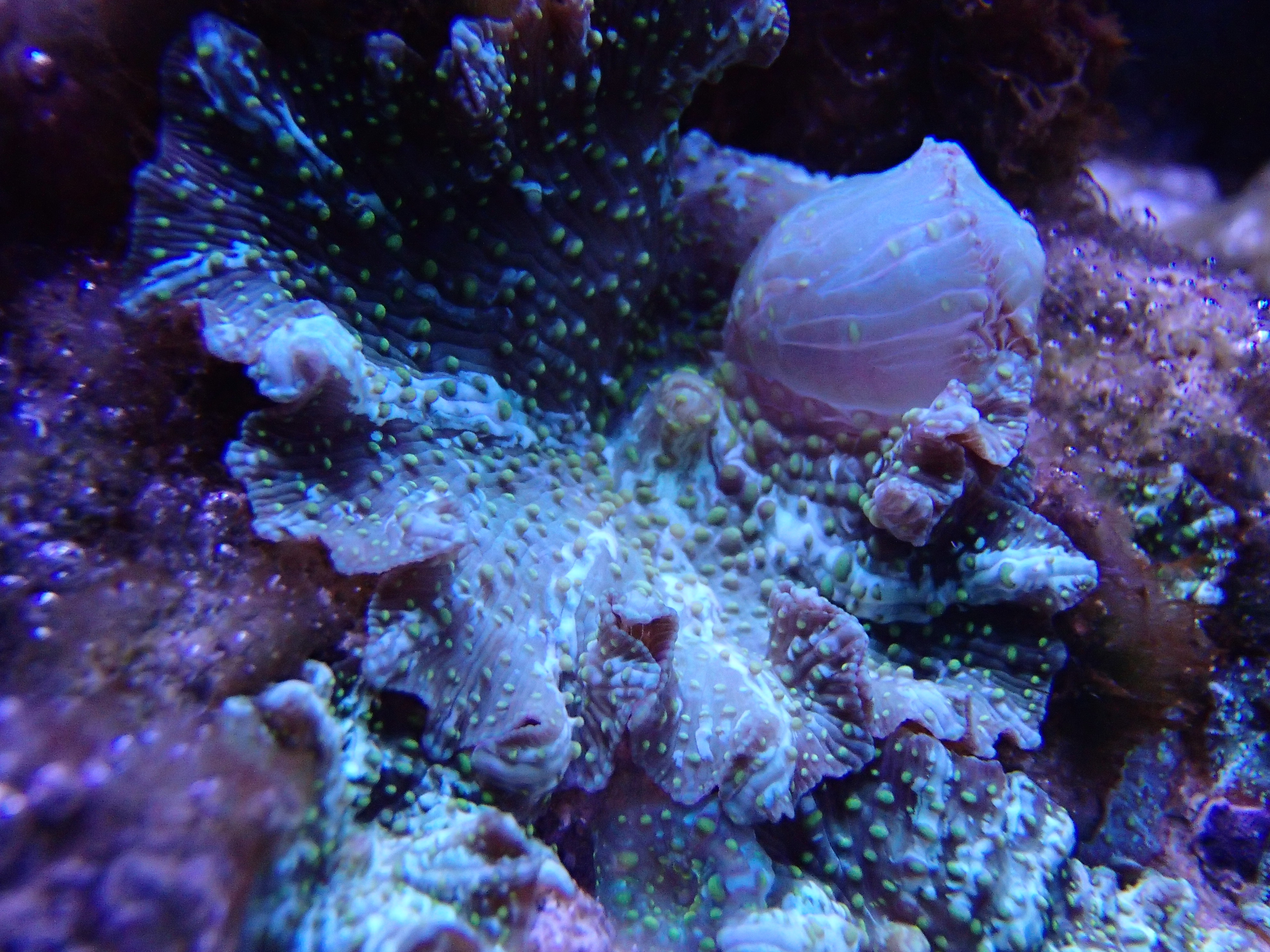 frankc said:
When an ordinary mushroom tries to become a bounce mushroom. I have lots of these shrooms, but only this one is doing this.

Looks like it has a hemorrhoid. Apply preparation H.
OP

Oops. I haven't been paying enough attention to the 150, and the alk has slowly gone down to around 5. This speckled rainbow nem is stunning in hot pink (much more so in person than I was able to capture in a picture), but it's not what it's supposed to look like. If you ever want a hot pink nem, now you know what to do. 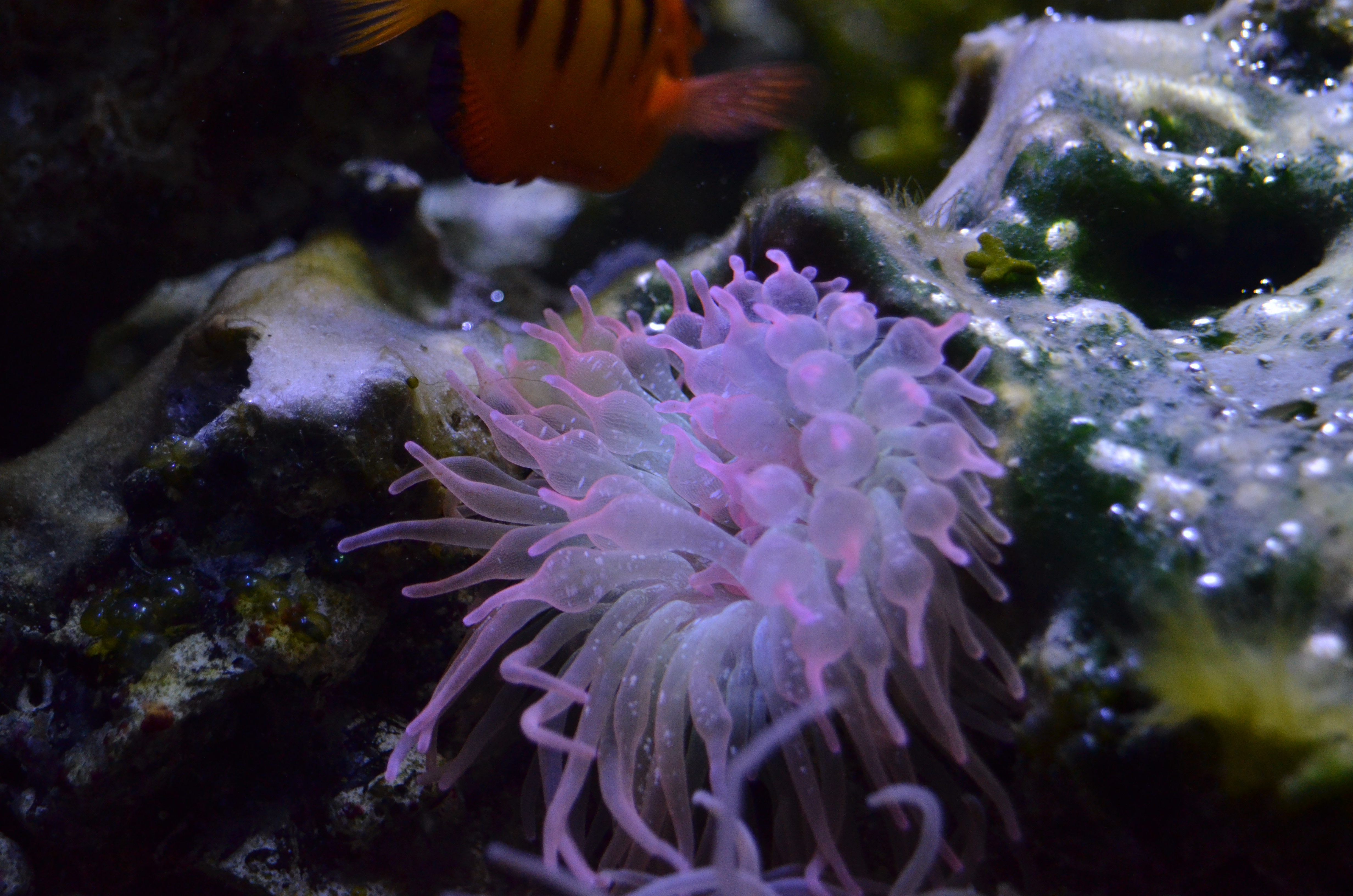 My JF Beach Bum is no longer just a tiny specimen in the middle of the frag plug. Despite the ongoing battle with dinos and hair algae, it has grown to become part of the reef. The color looks better in person than in this picture, but it is a bit faded due to the algae battle. 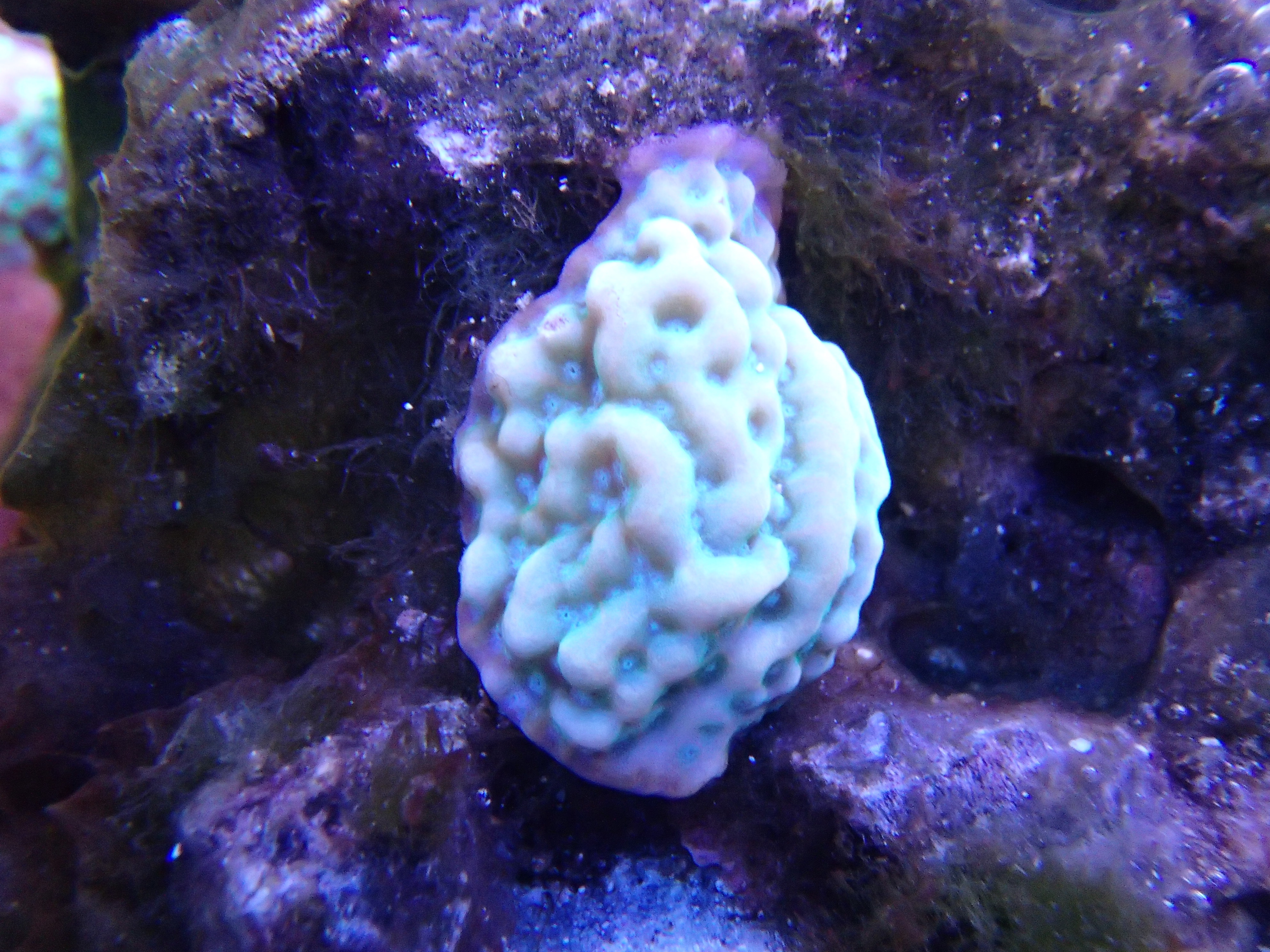 This is what it looked like a year ago, shortly after putting it in the new tank. It had lost some ground due to living in a QT for a few months after the old tank leaked. 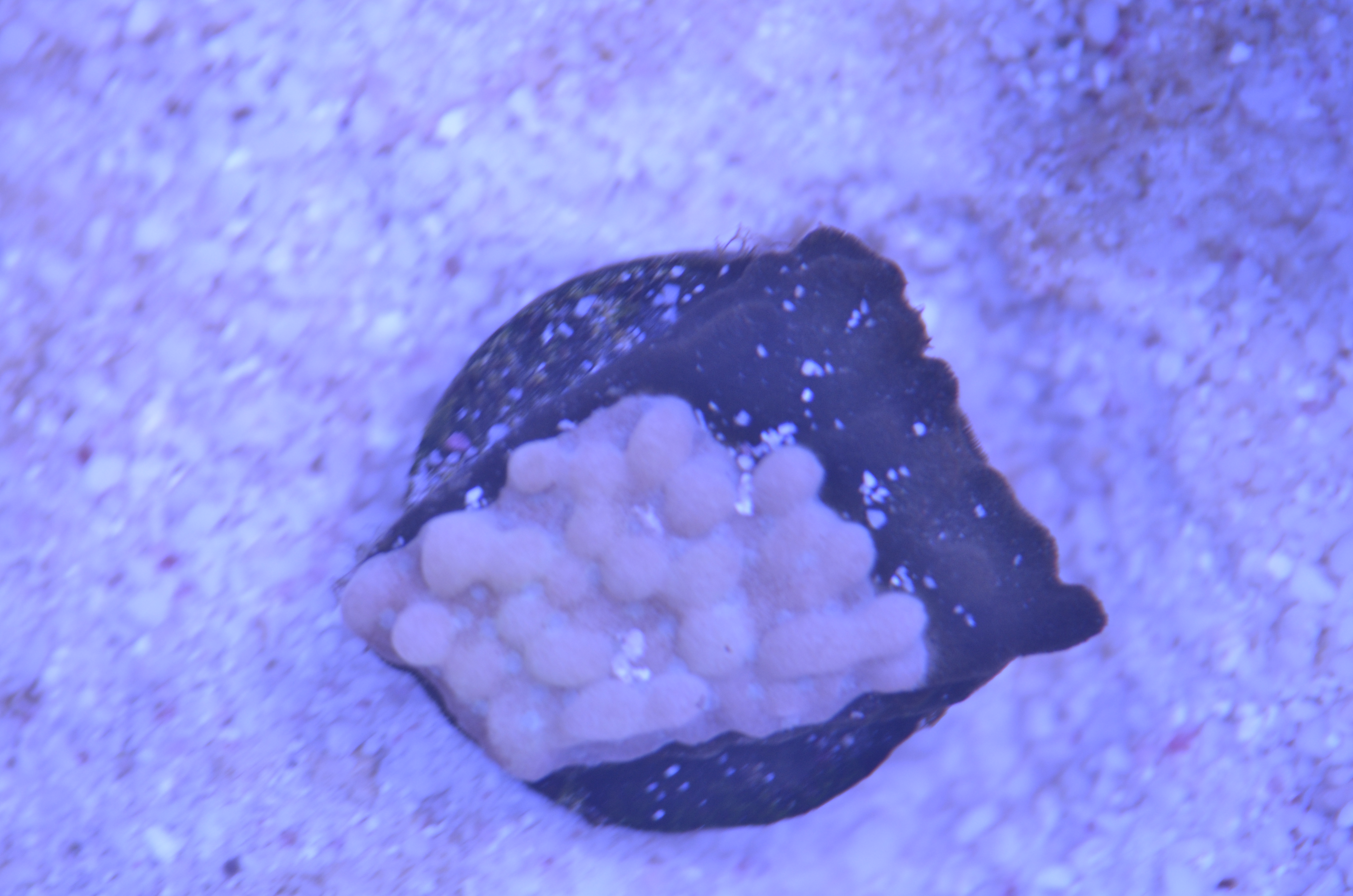 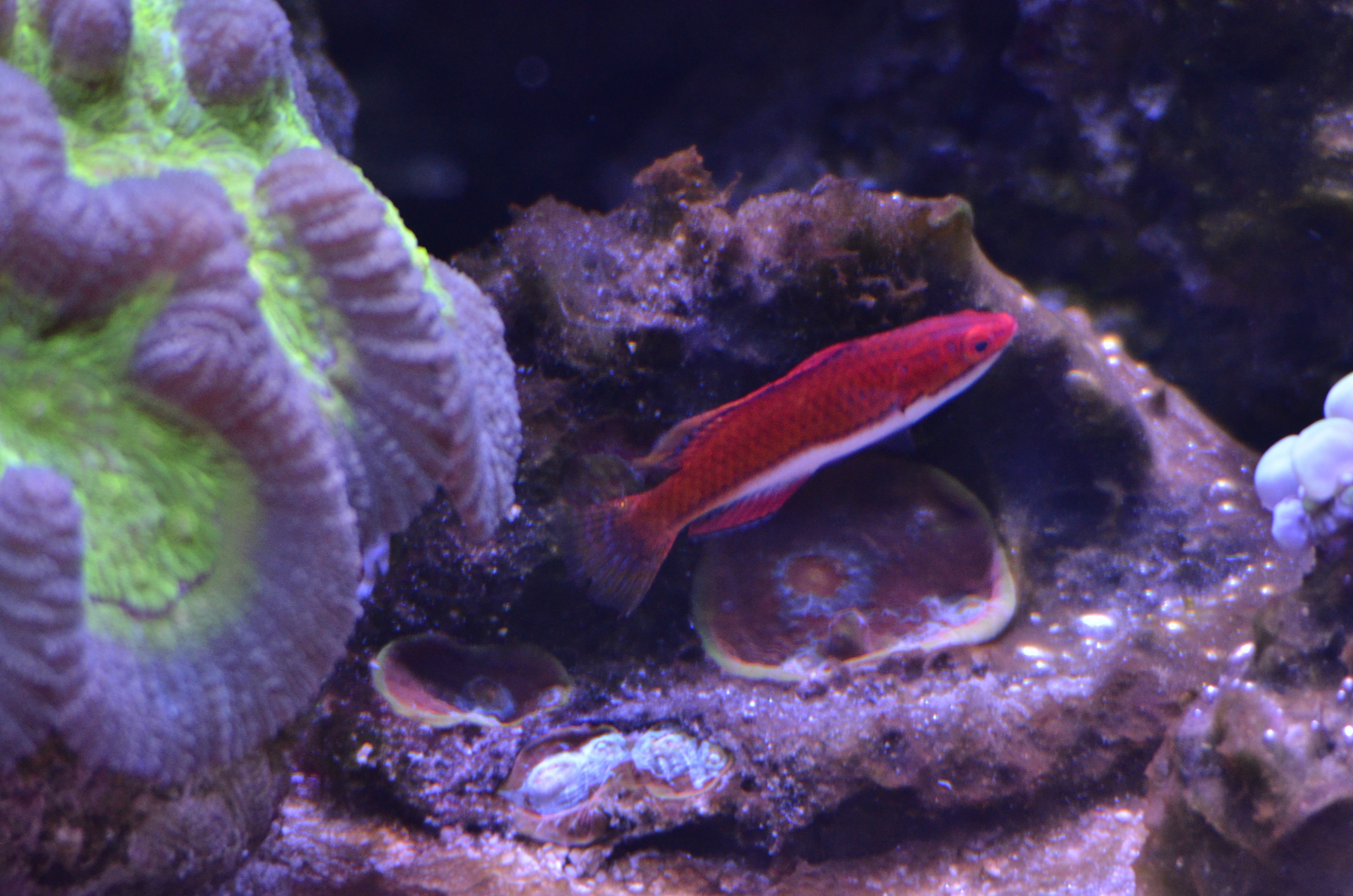 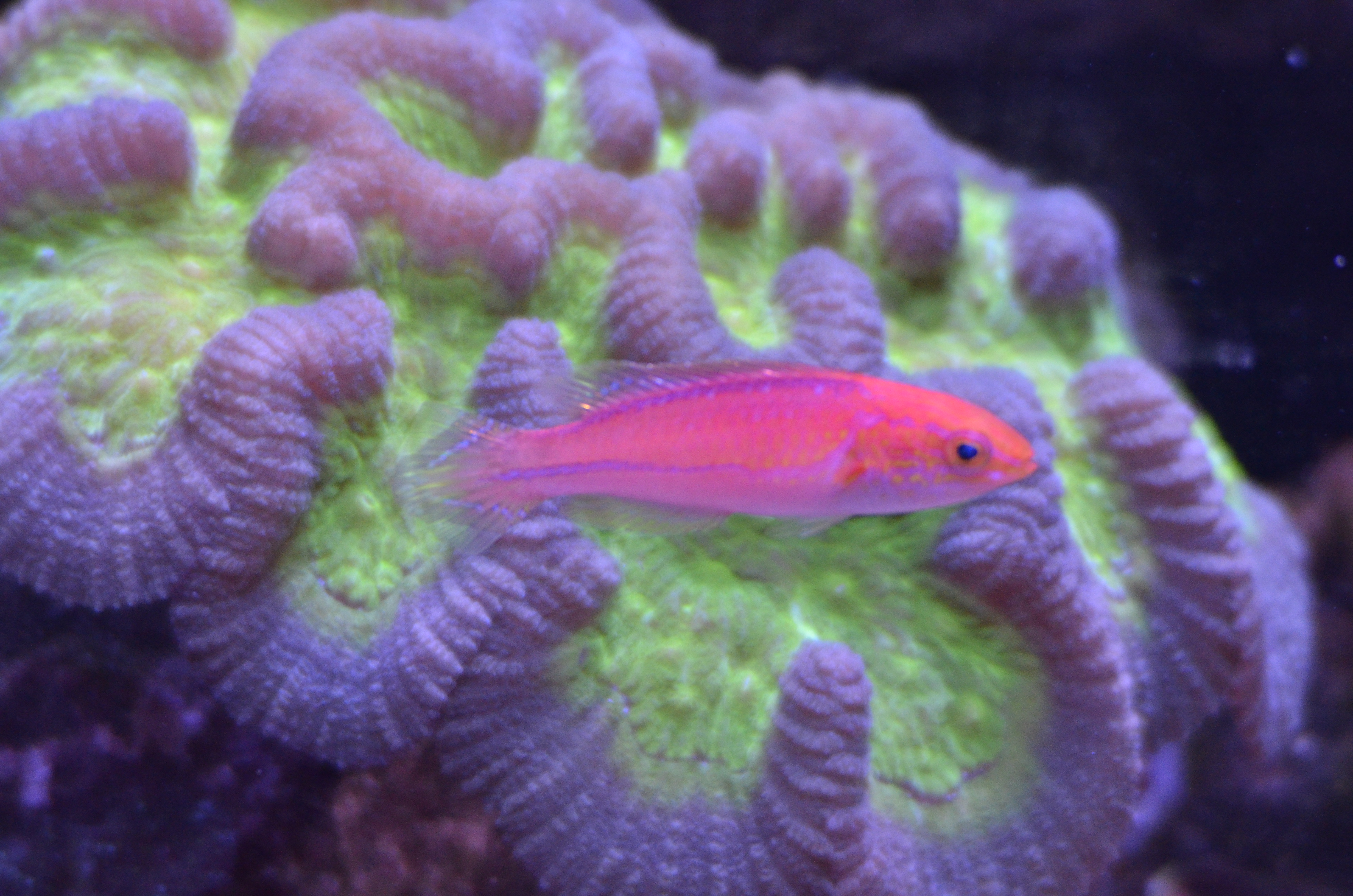 Same fish from above 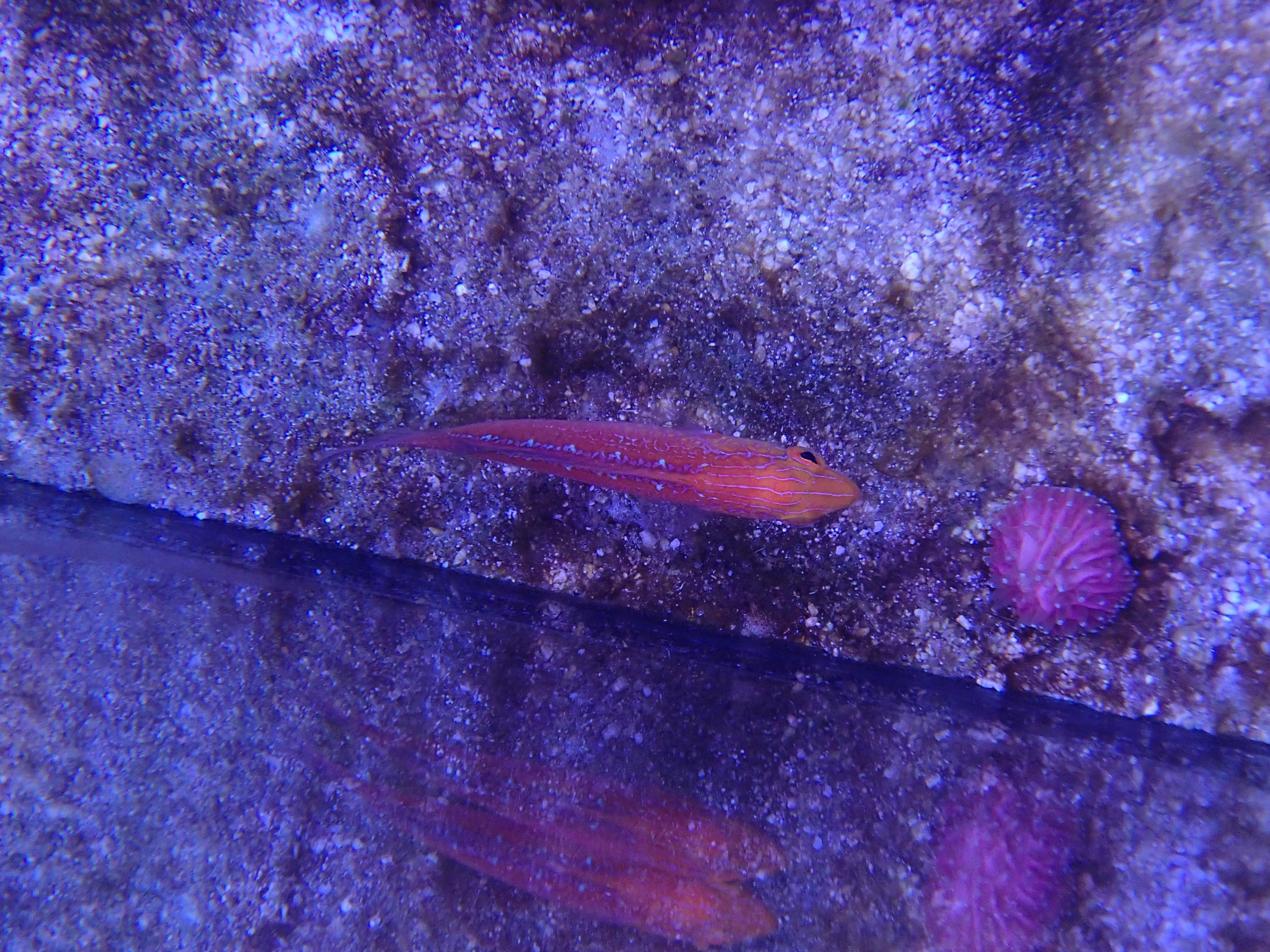 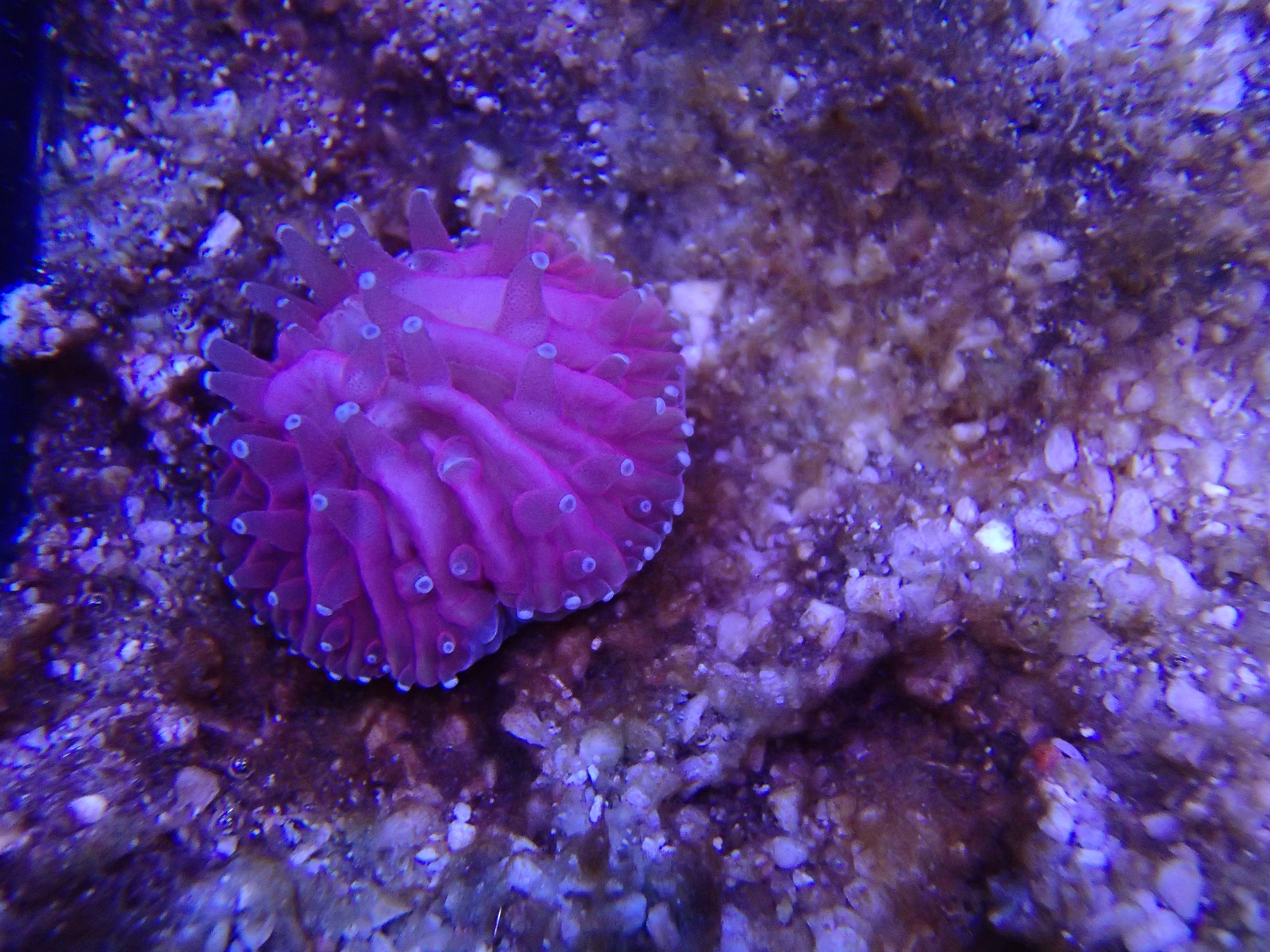 This coral is less than 1" diameter, but I often find it several inches from where it was the previous time I saw it. I may be one of those that is able to crawl to some extent, but it also sometime inflates itself enough that the current may move it some. 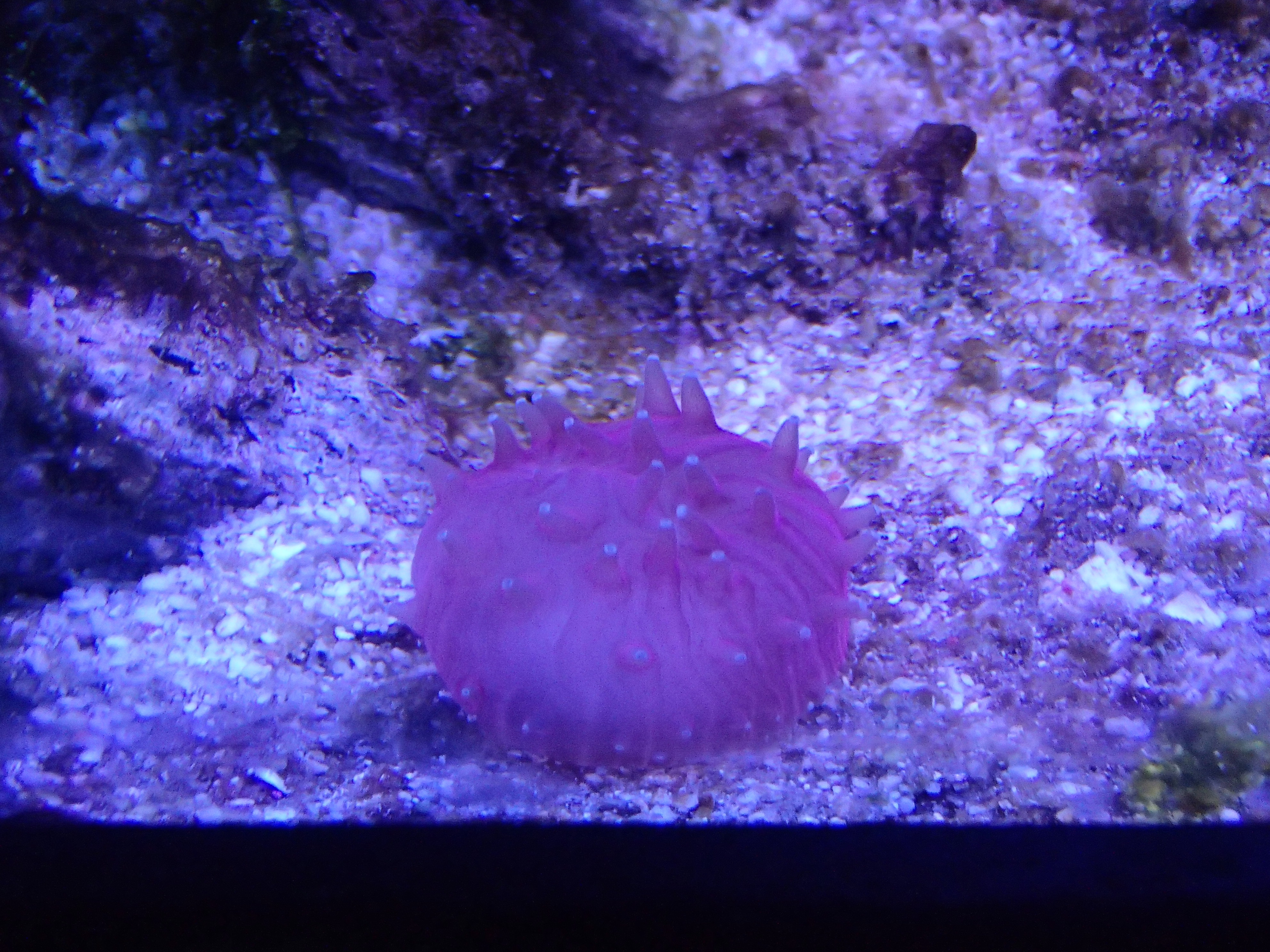 Frank...looking good man. Dose a little Waste Away and it will help fight that little bit of algae on the sandbed. Plus it adds in some good friendly bacteria. wink wink.
OP

Thanks. I may try that at some point. Currently I am using Vibrant to try to get rid of the dinos with some success.
OP

I'm super excited about my newest addition - a Quoyi parrotfish. I was inspired to get one because @reeftopia has had good experiences with them. Mine is about 6.5" long. I'm a little worried about whether he will get enough to eat long term. When he was in the QT I tried frozen mysis, brine shrimp, Cobalt veggie pellets, also put some live Halimeda and a rock with hair algae, and he didn't go for any of it. He did eat some pods and scrape some algae off the rocks. I was hoping that when he got in the main tank he would see the others eating and try it, but so far he hides when I approach the tank to feed. He's only been in the main tank since Tuesday night, so hopefully he will get over that. It's a good thing he doesn't like to eat corals - with that beak he could destroy them all in no time. 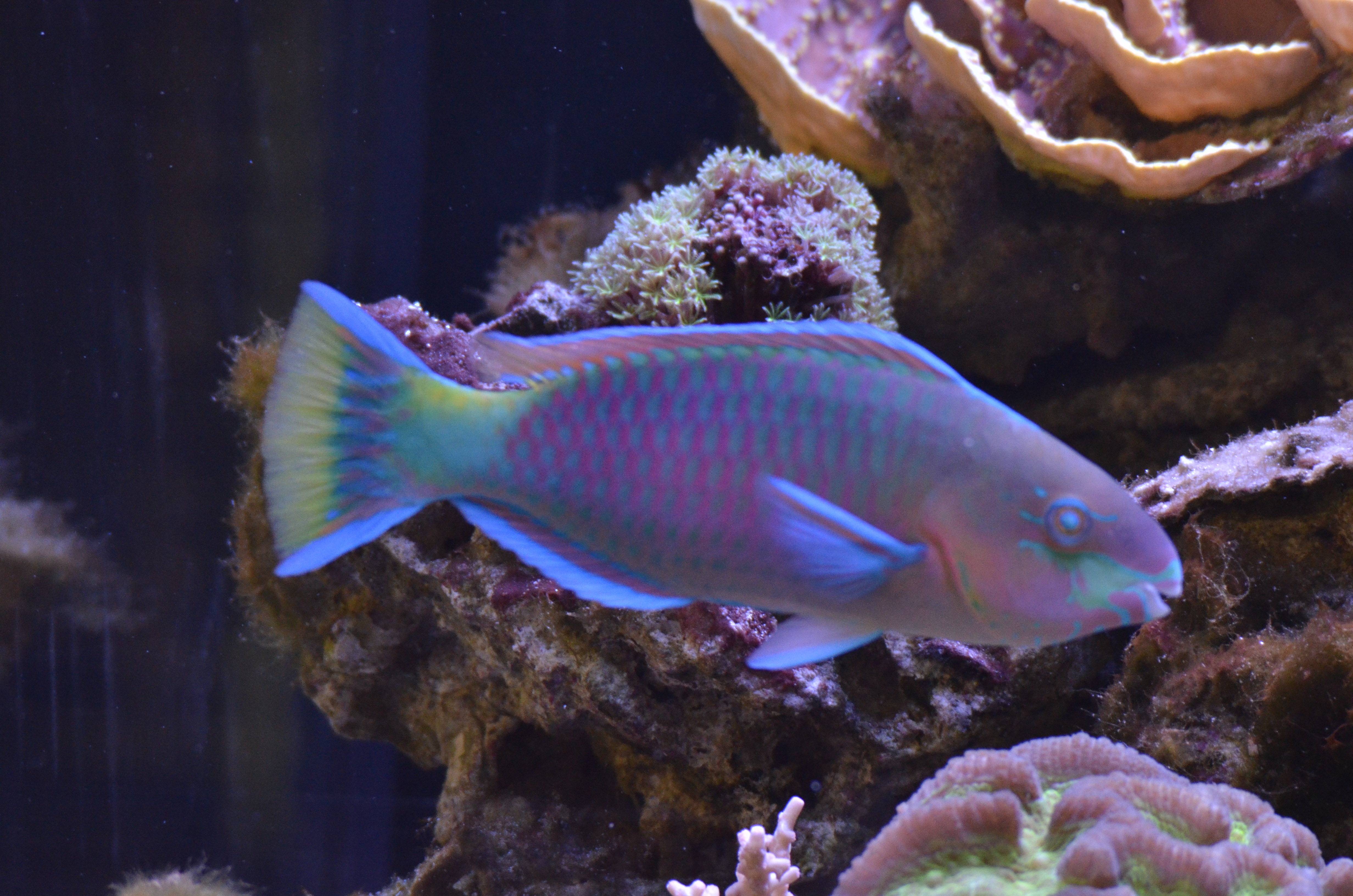 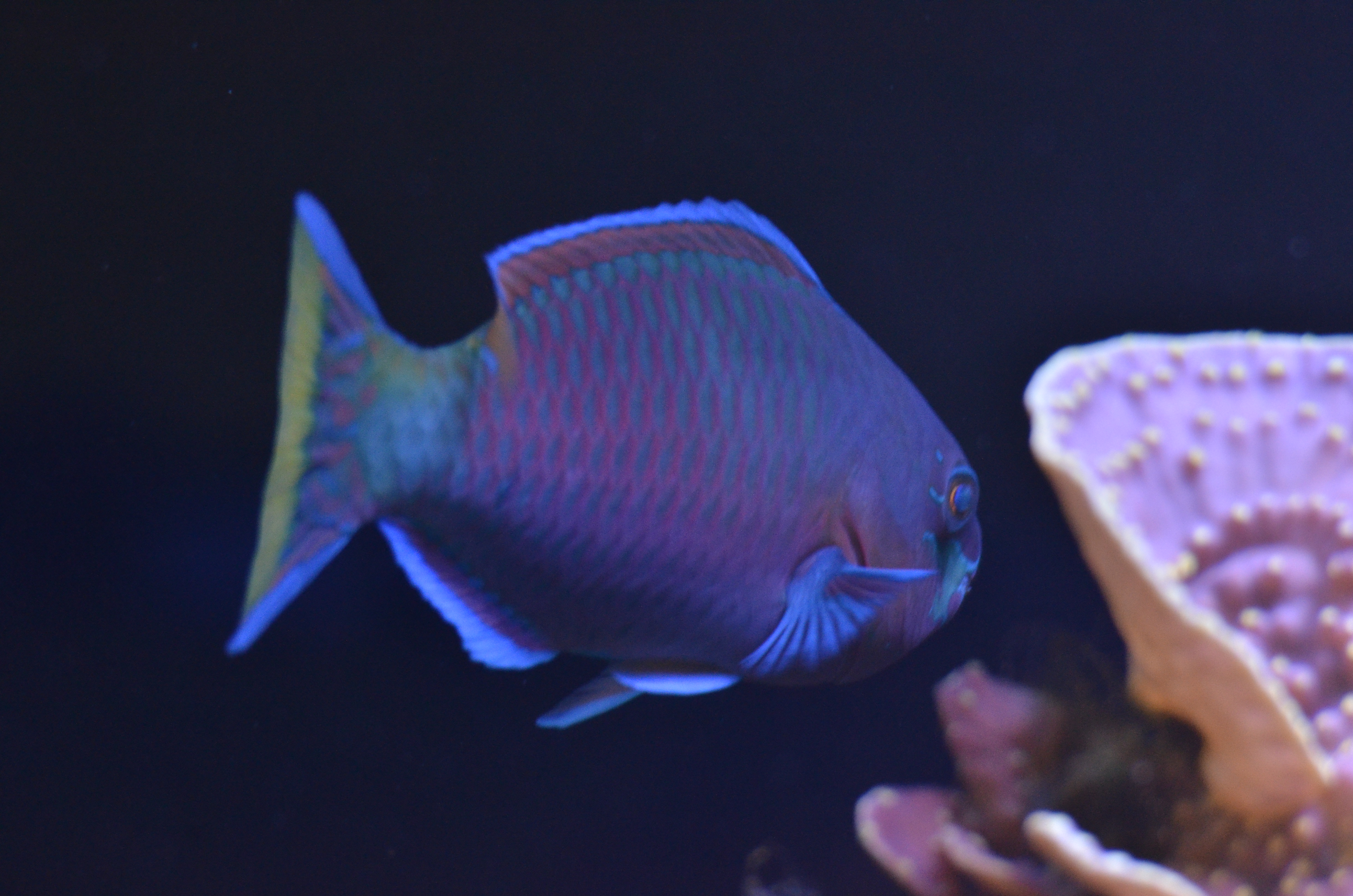 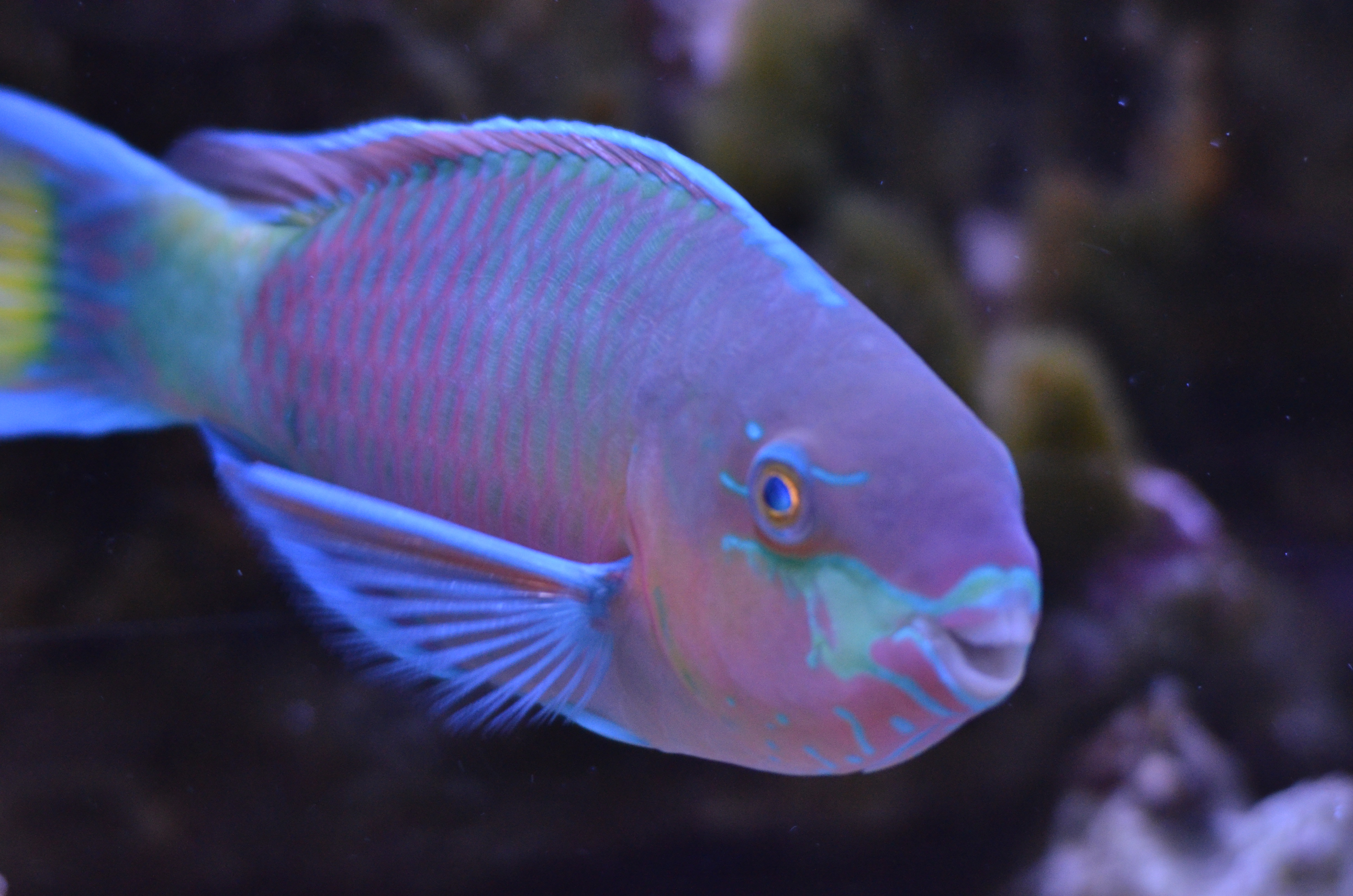